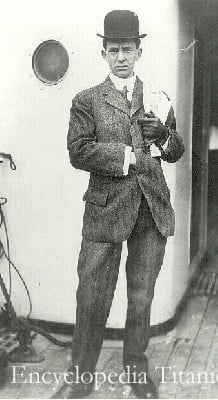 According to the book TITANIC TRIVIA, "Stewart Collett, a Second Officer of the Titanic, took his Bible with him off the ship because of a promise he had made to his brother that he would take it everywhere with him until they met again." According to the book TITANIC TRIUMPH AND TRAGEDY, Mr. Sidney C. Stuart Collett was a 2nd Class passenger enroute from London to Fort Byron NY. I'm sure that there are other stories about the life of Mr. Collett.
D

Here is an article on Mr. Collett that many may enjoy reading.  The reference to Fort Byron is a typing error.  His father was a minister here at Port Byron, which is my home town.
D