Why were the Lusitania's Funnels Painted Black?

Oddly enough- survivors were a bit unclear on this. I believe Charles Bowring remembered them as orange, while John Idwal Lewis recalled them being black. Thomas Slidell called them grey. Sarah Lund said the superstructure was gray, while Idwal Lewis said white. The ass't dock superintendant, who was once a Cunard officer, Chalmers or Chambers (don't have his words in front of me), but he also said the ship had been repainted. Why? Several reasons, and of course, the U-boat captains were not stupid, but it did add an element of confusion and certainly the black funnels helped disguise the ship at night, versus orange.
Mike

So it will always be kind of a mystery...because for every person saying the funnels were orange, there will always be someone who will say black or orange. Same goes to the superstructure: For every person saying it was white, another one will say grey. So maybe it will never be resolved. The most solid part of evidence is the diary entries made by that passenger (can't remember her name) saying the funnels were black and the superstructure grey. How authentic is this diary...does anybody actually have this diary? Also, I was reading in the Titanic Research and Modeling Association that article about the Lusitania and in one of the pictures, which is stated as "the last voyage picture" clearly shows the liner with a black hull, buff stripe, white superstructure and orange funnels. But there is a model in that same page showing the ship with the same colors, except for the funnels which are completely black. If you could make your own conclusions from all the information shown in both Sauder's article and TRMA's article, what would you say? Which colors would you "paint" the Lusitania in for her last voyage. I would personally give her how she is depicted in the first painting posted. My god, all this information contradicting one another is extremely confusing!! I have two paintings showing the ship in those last minutes: One is before being torpedoed and the other is Ken Marschall's dramatic portrayal of the torpedoing. Which one is the most accurate (I guess it is the one by KM, but it doesn't hurt to ask)? I also have a photograph which shows the funnels being painted during sea to, what I think, is a mousy grey. This also contributes to the fact that in ES's article, somebody recalled seeing the funnels in this color. 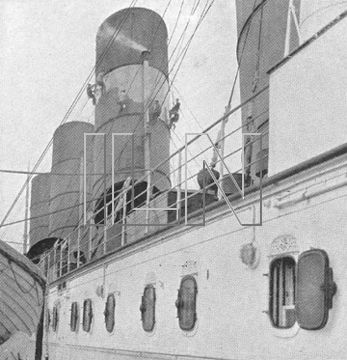 Conclusion: Where the funnels during the sinking orange, black or grey? And was the superstructure white or grey? Please answer something else than "there is an excellent article by Eric Sauder you should read" because that's the only response i've been getting. I REALLY WOULD APPRECIATE ANYBODY ANSWER!!!

Please answer something else than "there is an excellent article by Eric Sauder you should read" because that's the only response i've been getting.
Click to expand...

Speaking as a message board member: On issues related to Lusitania, "Read what Eric Sauder has to say" is as good as it gets. In this instance, that's the best answer there is to the question you asked, Gustavo.

I REALLY WOULD APPRECIATE ANYBODY ANSWER!!!
Click to expand...

Speaking a moderator: Please refrain from using all capitals; it's the web equivalent of shouting and is quite impolite, especially where (as here) your question really has been answered already. Shouting what appears to be a demand for a different answer than you've already received is not likely to be productive, but is likely to alienate people.

While I was putting the TRMA LUSITANIA modeling article together, and doing research for my next book on the LUSITANIA, I uncovered a remarkable bit of information on that "last voyage" footage that I had never before seen in print... there was an enormous snowstorm in New York during her previous departure; Eric Sauder previously narrowed it down (based on tide conditions) to those two departures, but the absence of snow in the footage nails it down to May 1, 1915 with certainty.

The model that appeared in the article was done by Jerry Davidson a couple of years ago; he did a terrific job on it, and he was kind enough to take a few snaps of it to use in illustrating the guide. If it is correct that the funnels were painted black during the voyage, then it would be accurate for the way the ship looked off Ireland on May 7.

Would painting the funnels black dupe a German commander? Not really; how many 4-funnel liners would have been in those waters at that time? Anyone even remotely familiar with merchant ships of the day would have been able to tell it was the LUSITANIA or MAURETANIA without blinking an eye. Anti-submarine detection, elusion and warfare was in its infancy at that time.

Yes it does...I mean, maybe the funnels kind of confused, but why did they also paint (if they did) the superstructure grey? Did they have to go to that extreme? Because don't think a submarine at that distance would see every little detail of the liner. The funnels because they could have differenciated the orange from the black tops, as for the superstructure I think it was a waste of time and paint. Plus this really takes appeal from the once glorious liner she was. With her superstructure grey and her funnels black, she would have looked completely different as she was in the beginning of her career...but maybe that's what Cunard wanted...

P.S: Could the painting have been done while at sea (she left with orange and black funnels (as that photo in your TRMA Lusitania article, but sunk with the black funnels)? And, once and for all, was her superstructure grey when she sank? I just can't think of Lusitania with grey superstructure...I mean i'll shocked if this is true.

It can get confusing at times...

The superstructure was originally painted gray (as were the funnels) right after the war's start, and the photographs of the ship in that being painted gray at sea appeared in the ILLUSTRATED WAR NEWS and ILLUSTRATED LONDON NEWS shortly thereafter.

Later that fall, however, Britain was feeling a little more relaxed about the safety of the LUSITANIA and other merchant shipping, since most of German forces were bottled up in port. As Eric points out in his article, she was repainted in standard service colors (black hull, white superstructure, Cunard livery funnels, etc.) albeit with a brown/gold band around the base of B Deck.

She stayed in that scheme (apparently, from what has been pieced together so far, and barring further revelations) until at least May 1, 1915.

So, if she stayed like that until May 1st, the only logical explanation is that her funnels were painted black at sea, during the crossing. If this is true, she would appear like in Ken Marschall's paintings and Jerry Davidson's model, or not?

P.S 2: I know this may be out of topic, but a change I noticed made to her until her sinking was this sort of "gap" made to her forward B-Deck. What was that exactly and why was it made? >>Do you think that painting the liner's superstructure grey and giving her black funnels really helped elude german U-boats?<<

As J. Kent Layton stated, the answer is "Unlikely." The Lusitania's cheif defensive weapon was her sheer speed. Given how slow submarines of that era were, such craft typically had to sprint some distance on the surface just to get in a favourable position to develop a firing solution. Given the limitations of the existing weapons, the real trick was to get to a point that was close enough for a hit to even be a possibility then fire the weapon towards a point where the ship was expected to be.

Since the chances of even scoring a hit, much less a kill with a single weapon was very small, a submarine would sometimes have to fire a spread of torpedos in the hope that even one would get a hit.

When you get down to it, the U-20 was extremely lucky.

In my mom's basement.

My only guess is it was covering the ship's identity from U-boats. Similar to how olympic was painted gray. just a guess
B

I recall seeing a photo of the Aquitania in the early days of either WW1 or WW2 with a black hull and grey superstructure. The funnels looked dark, so they might have been either dark grey or black. I believe this was done either before her final pre-war passenger crossing or upon arrival in NYC. I'm leaning toward this being at the start of WW2 but could be wrong. Perhaps this is exactly how the Lusitania was also painted at some point prior to her last crossing.

Ken Marschall has painted them black and Robert Ballard's book Exploring the Lusitania says they were painted black to disguise her during WW1.

Here is a Ken Marshall painting showing her in black funnels:

Yet contemporary posters from the period show her with her traditional black and red Cunard livery, as in the famous Irish recruiting poster: