How to Survive the Titanic. Or The Sinking of J. Bruce Ismay

How to Survive the Titanic. Or The Sinking of J. Bruce Ismay
(Frances Wilson, Bloomsbury)

'Ismay'. As with that famed maritime opening line ‘Call me Ishmael,’ the leviathan that looms behind immediately swims into the mind’s eye, purely in pronouncement.

Frances Wilson invokes Herman Melville to compare Ismay to Captain Ahab (and even to Noah in this often ludicrous book), but predominantly plumps for Joseph Conrad in her meditation on the life - and the elemental 1912 living - of this single individual, in whom is seemingly forever embarked the fate of fifteen hundred.

Is-may. The first syllable asserts enduring existence, the second an implication of twin alternatives. Ismay lived, and his reputation died. Had he not entered collapsible C it is scarcely imaginable that anyone would have branded him a coward. Instead mere mortality would have conferred its very opposite, in the palpable vein of an Isidor Straus or any other drowned potentate of the merchant classes. But such is a preserved-in-amber afterlife. With Ismay, though he now be dead, we can still poke the wounds. 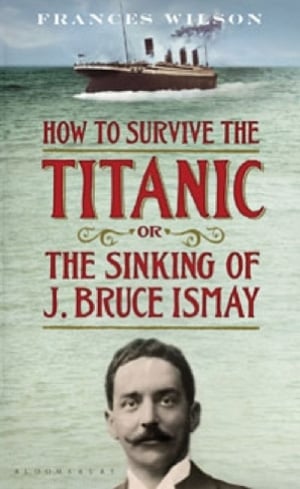 And so Wilson, as sanguinary soothsayer, enters into her very own launch – because this is a commercial voyage, complete with the richly absurd sales claim that Ismay fell in love with a married passenger on the maiden voyage. He did no such thing.

It is as well that this work is largely a meditation – albeit with some interesting photographs and detail provided by the Cheape family – as the author seems only rudimentarily acquainted with the Titanic story. Indeed in many respects her escapist craft leaks like a sieve.

The author’s self-inflicted injuries can be prodded as a parlour game in turn. The reverse jacket illustration claims to show collapsible C, whereas it is a well-known image of D. That mistake is repeated in the caption to a photo inside – a pretty gruesome error when it concerns the lifeboat in which your literary subject was saved. D for dunce?

Among pictures alone, the sins are legion - the old canard of Olympic officers masquerading as those of Titanic is uncomprehendingly repeated, Lightoller is not pictured on the maiden voyager’s bridge as claimed (it’s the Oceanic), Queenstown never was a synonym for Cork (a mistake twice made – as with the repeated false rendering of the name of acclaimed Sphere artist Fortunino Matania), and even Ismay’s memorial stone at Costelloe Lodge has its inscription mistranscribed.

Wilson’s previous books indicate she likes to write psychological biography, but there are many instances here of ‘physician, heal thyself,’ which will go unnoticed among the general reading public, but which will trouble those familiar with the facts, such as members of ET.

The laughs begin on page 1, as Ismay aboard dines with surgeon O’Loughlin, the latter ‘in his crisp white uniform.’ A line or two later, that Sunday is treated as the fourth day of the voyage (it’s the fifth), and the list begins and grows steeper from there. It is falsely asserted that 'six orphaned babies' were landed in New York and, separately, that two crewmen's wives died from 'shock and suspense' in Southampton. Bull of the highest order!

Anglo-Saxon passenger and other names are misspelt. Filson Young is described as an Irish journalist, the cork of lifejackets was apparently spread over where the ship went down (it was insulating refrigeration cork), and the author repeatedly claims that the deck was awash when collapsible C launched, yet also includes occupant accounts about the long descent to the sea, pushing the strakes off from the rivets along the side, and even avoiding the low pump-water jets. She sees no contradiction in any of this, or in the many more instances that might be cited, and is evidently a scatterbrain in both style and substance.

This study, in which Wilson emotes and theorises to the invisible corpse on the couch, eventually ends in an appeal to 21st century relevance in the language of a supermarket tabloid – ‘Ismay is the figure we all fear we might be. He is one of us.’

No, he’s not, because the premise is false. The expectations of class station and honour do not exist to the same standard today, because elevations have been torn down. Ismay was vilified in 1912, yet recently another marine disaster gave rise to useful modern comparison (not mentioned in these pages).

It involved British Petroleum and American livelihoods and environment. BP chief executive Tony Hayward was excoriated for a careless remark that he would ‘like my life back’ as he wilted publicly amid the incessant pressures built up by months of bungling over a devastating Gulf of Mexico leak. This modern  slang term, that he could 'get his life back' is used of Ismay (p. 51), and is incongruous in context.

Anger had its arrow point, and Hayward resigned. But his momentary personal reflection is understandable. Nobody went so far as to genuinely suggest that honour dictated that he should have been suffused in the surf like an oil-suffocated seabird. And should he now live out his life in endless self-recrimination? It would be an extreme response to answer in the affirmative.

Society pretended to be nobler 100 years ago, and probably was, with supposedly recognised strictures that held all behaviour within ‘good form,’ like so many whalebone stays in a corset.

Classrooms taught the lyric that ‘the boy stood on the burning deck, whence all but he had fled,’ a florid poem made ludicrous by the child’s ‘gallant’ but needless expiry. Those who fled were the smart ones, yet such nonsense gained traction. O tempora, o mores!

The higher the class, the higher the bar, such that newspapers extolled sacrifice, even to needless and thus counter-productive levels. As G.K. Chesterton observed in 1912: ‘You will hunt Ismay from court to court, as if he were the only man saved.’ He thereby subverted the paradigm by taking it to its utmost bizarre logic: must every man die in such circumstances?

Thus the outrage was never really about Ismay personally. Had he died, the fickle finger of fate would have moved on to the next highest ranking, most especially if British. But Sir Cosmo Duff Gordon was only ever spattered with modest mud…

Ismay probably recognised cant for what it was. He had been through a fiercely searing experience in which his perspectives must have been instantly righted. He had no duty to accept any ‘purgative’ press pillorying, and likely detected the scapegoating process for what it was. Ismay insisted in evidence that he searched his own conscience, and found it clear.

Wilson rehearses all the ‘J. Brute Ismay’ stuff, jaded though it is, with the usual expectation that he became a kind of J. ‘brood’ Ismay for the remainder of his life. But the evidence is that he just got on with it as best he could, not that he was not immensely scarred by what he had undergone, in common with all others to escape. If Ismay in his soul-searching (etched in letters subsequently written to Marian Thayer and discussed by the author) had absolved himself of responsibility, who are we to thrust it back upon him?

But Wilson rehashes apocryphal guff about Ismay booking two seats when going to the theatre – one for his hat and coat. But what about his other side? Why not book three seats, one each for the hat and coat, if a sociophobe? How attend at all for that matter? Too much indulgence is paid to such drivel.

There are a lot of literary excursions in this book, which are diverting in every sense. What is lacking are real insights from those who knew the ‘subsequent Ismay,’ particularly in his Costelloe retreat, where he doggedly logged every one of the thousands of fish to give up their lives on his water, but where this obsession goes unremarked upon because the author is unaware of it. Nor has she tracked down former valets or servants (or their descendants) who had revealing things to say, particularly in relation to Ismay’s somewhat masochistic approach to the festering ulcers that eventually claimed his right leg.

Ah but she does cite Freud! Yet in self-aware post-modernism Wilson mentions and affects to mock that clanging line of Cameron dialogue from the 1997 film that has Ismay ask: ‘Freud, who’s he? a passenger?’

It would be unkind to say that Ismay gratefully slips into the background, away from such a delirium of the socially celebrated, but the truth is that this book is about the idea of him, rather than the reality. And that suits the author, who inveighs against armchair judges, because philosophising and name-dropping can be a soft option. And deeply ironically, in view of the subject matter, it’s an option the author gladly took, made worse by abject failure to nautically proofread the manuscript.

Yes, perhaps it is a pleasant-enough boat trip in a harmlessly opposite direction. That’s if you like to dip your oar in psychobabble (concentrating, like Ismay, on anything but the sinking Titanic), and many people do.

The dedication is ‘for Pauline,’ apparently a reference to Pauline Matarasso, Ismay’s granddaughter, to whom the book is indebted for its better passages.

These are taken from Matarasso’s now-scarce but blissfully authentic 2005 work ‘A Voyage Closed and Done,’ which is vastly more thoughtful, insightful, meaningful and atmospheric than the frankly inferior fare on offer here. Two stars.

How to Survive the Titanic or The Sinking of J. Bruce Ismay
by Frances Wilson
Published in hardback and ebook by Bloomsbury
15th August 2011, £18.99 (ordering info)

Information about How to Survive the Titanic. Or The Sinking of J. Bruce Ismay (PDF)

Note by Frances Wilson regarding the Ismay family archive