Into the Danger Zone: Sea Crossings of the First World War 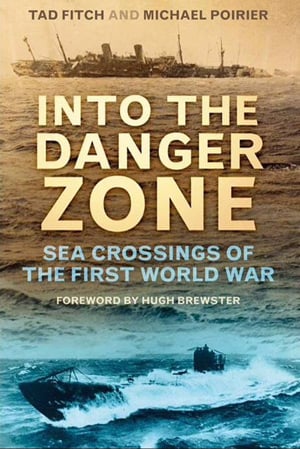 This book (by Tad Fitch and Michael Poirier) is a revelation. After the sinking of the mighty RMS Lusitania by a German torpedo in May, 1915 you may wonder who, in their right mind, would want to travel by sea again during the four First World War. Yet, as authors Tad Fitch and Michael Poirier reveal in their carefully researched book, many people took that risk, and sadly paid the ultimate price.

The attack on the Cunard liner Lusitania is well documented here and includes moving accounts by a number of survivors. The loss of over 1,900 lives was the most shocking outrage since the peace-time sinking of RMS Titanic in 1912. However, I have to point out that I was gripped by some of the lesser known disasters which the authors have uncovered from the archives.

The first liner sunk during the war was the British owned Elder Dempson ship, RMS Falaba in March, 1915. As it made its way through the Irish Sea both passengers and crew spotted a submarine surfacing nearby. When it got close enough it’s captain ordered everyone to evacuate with the menacing announcement: ‘I am going to sink the ship’. He was as good as his word. One passenger described the scene:

‘The pirates had actually fired a torpedo at her at range of 100 yards, when they could distinctly see a large number of passengers and crew... on board. It was a dastardly thing to do – nothing but murder in cold blood.’

104 people lost their lives. But it was just the beginning.

Despite the ‘Arabic Pledge’ – an agreement by all sides not to sink liners without warning, the aggression continued. One early casualty was the wreck of the RMS Hesparian, a story practically forgotten now.

The Hesparian, a passenger liner belonging to the Allen Line, was torpedoed off the coast of Ireland on 4th September, 1915. Besides carrying civilians and cargo, it was also carrying a number of wounded Canadian troops home.

The ship was evacuated under relatively calm conditions with a small loss of life. However, the U-Boat captain responsible, one, Walther Schweiger, had, the previous May, sunk the Lusitania not far from that very spot. This was, no doubt, another propaganda victory for the already feted German captain.

As a curious footnote, the authors point out that in the hold of the Hesparian was the body of a Mrs Frances Ramsey Stephens, a victim of the Lusitania. Her coffin was being transported back to Canada for burial. This ‘marked the second time, once in life and one and death, that a vessel she had been travelling aboard was torpedoed by Kaptainleutnant Schwieger and U-20.’

More surprising still is the story of ten year Austrian lad Rudolf Gorog who incredibly remained fast asleep during the evacuation of the ship. He had been quite forgotten in his cabin until he awoke to find the Hesparian practically deserted and slowly sinking:

‘The noise of the rushing passengers did not wake me. In the morning when I awoke I went to my mammie’s berth to say good morning to her and to get my boots. When I got there the room was empty. I grabbed my boots and rushed on deck, where I did not see them, nor did I see any of the other passengers, and only one or two of the crew.’

For Gorog it was a lucky escape indeed. It also leaves one to question his mother’s state of mind during the emergency. But then, as the authors repeatedly reveal, during the war at sea, ordinary people often found themselves in extraordinary circumstances.

Sample pages from Into the Danger Zone

Consider this chilling account from American passenger Cecile Greil who survived the sinking of the SS Ancona in November 1915 with the loss of 200 lives. As the ship began to founder Greil attempted to get her money and belongings from her cabin below decks, uncertain of what lay ahead:

‘I entered my stateroom intending to get my passport. [It] was in a trunk under the bed and while I was stopping to draw out my trunk a shot passed through the port hole window shattering glass and I heard a missile pass over my head. My chamber maid, panic stricken, was standing before my door and the missile struck the upper part of her head, she fell dead before my door. I then decided to leave the ship at once...’

As a writer with an interest in the Titanic, I was particularly pleased to find references to that ship threading their way through the text.

The authors provide a detailed account of the sinking of the Titanic’s larger sister ship, HMHS Britannic (a floating hospital) which was sunk in the Kea Chanel in November, 1915. On board were three Titanic survivors including nurse Violet Jessop who was nearly killed when her lifeboat drifted too close to the spinning propeller blades of the stricken ship. The mangled bodies of others not so lucky floated by: ‘I opened my eyes on an indescribable scene of slaughter’ she wrote later. Casting herself into the water she bobbed up beside a man with his head cracked open ‘like a sheep’s head severed by the butcher, the poor brains trickling out on to his khaki shoulders.’

Fellow Titanic veteran and crewman Archie Jewell was lucky enough to survive the Britannic disaster, but, as the author’s note, he was to perish on the SS Donegal when it was torpedoed by UC-21 in 1917.

The authors also include Titanic survivor Thomas Threlfall who survived the sinking of the SS Arcadian on 15th April, 1917. Threlfall later noted: ‘It was the same day of the week and the same date of the month that the Titanic went down and I have come safely out of both affairs.’ He avoided a watery grave and died in 1934.

Into the Danger Zone is liberally illustrated with photographs, many of which have never been published before.

One set of shots graphically reveal the full horror the sinking of the SS Cameronian in 1917. Survivors are seen is struggling to stay afloat in overcrowded lifeboats, uncertain of rescue. Another, dramatic image on page181 captures the moment the water rushes up the promenade deck of a sinking liner (name unknown).

There is a fascinating collection of photographs of the ferry SS Sussex (torpedoed in the English Chanel by UB-29) showing her dazed and confused passengers in the aftermath of the attack. Somehow the ship limped home but the photograph of her taken in dry dock reveals her bow completely blown off. Miraculously most of the passengers survived.

I was also moved by the photograph of the troopship SS Arcadian diving bow first. Men clamber down the falls like ants while two lifeboats hang uselessly off the side of the ship. The stern of the Arcadian is raised completely out of the water, like a finger pointing accusingly to the heavens.

One brave amateur photographer captured the sinking of the French liner Sontay in April, 1917. Taken from a lifeboat, it shows passengers desperately climbing over davit falls as the ship founders. It could be a movie still.

Into the Danger Zone is a gripping read. The authors provide us with solid facts yet it reads almost like a novel. Both Finch and Poirier are regular contributors to maritime periodicals and their love of this subject shines through the text. This book is full of interesting stories, many of which have been unearthed from private collections. There is a comprehensive bibliography, notes and index.

What I love in particular is that you don’t have to come to this book with any prior knowledge of the First World War or the ships concerned. You can also dip in and out of the book at your leisure and you are guaranteed to find some real gems.

I cannot recommend this book enough.

Into the Danger Zone by Tad Fitch and Michael Poirier