The Life and Times of Hugh Walter McElroy

Richard Alfred McElroy was born in the year 1780 in West Derby, Liverpool. In 1811 he married a young lady named Elizabeth Anne, who was originally from Norfolk.

In June 1816, she gave birth to a boy, they christened him Richard, and after a period of just eight years (1824), she gave birth to another boy, who was christened Hugh, but because of complications during childbirth she died, at the age of just 37, a common event in the early nineteenth century.  Richard Alfred lived till he was 53 and died in 1833.

Richard Alfred’s son Richard always held it against his brother Hugh, for his mother having died in childbirth, which is the reason behind the family “twin” graves, Richard did not want to be buried in the same grave as his brother, so after Richard’s marriage to Mary in 1844 (who was from Fleetwood in Lancashire), he stipulated that his grave would only be for his wife, himself, and any family he may be blessed with, two years later, Mary gave birth to a boy, after a complicated childbirth, both mother and child survived, their son was christened William, at the age of 10, he was admitted into hospital, where they found he had contracted tubercle bacillus (tuberculosis), after a short stay in hospital, he died, and was buried in Richard’s family plot, one of the family twin graves in Anfield Cemetery, Liverpool, Richard and Mary moved to West Derby after losing William, from that point, contact between the two family’s was very spars.

Richard’s brother, Hugh, had lived at the family home, and in 1833 Hugh was by then just 20 years old, he had met a lovely Irish girl named Bridget, who was (we believe) from County Tipperary, Ireland. she was aged just 16, her parents had emigrated to England when she was 5 years old, Hugh and Bridget fell in love immediately, and they married in August 1839, then in 1844, she gave birth firstly to a son, Richard Michael, two years later in the spring she gave birth to a daughter, Mary Hannah; Bridget had problems at birth with both children, it may be a coincidence, but both children died at the age of 44, Mary Hannah never got married and stayed with her mother,  Mary Hannah herself died in 1890, her father Hugh, died in 1870.

The 1891 census it shows Bridget (Ireland), aged 70, living at 37a, Shaw Street, Everton, Liverpool (living on her own means). She had a 17 year old boarder, John Wilson, who worked as a clerk and was from Ireland (she possibly took in a boarder to help offset the bills) there were also two General Domestic, Mary Ellison who was from Liverpool aged 50, also Mary MacCabe also from Liverpool, aged 27 years. Bridget died at home in Shaw Street, Liverpool, on the 8th November 1897, aged 77 years.

Richard Michael McElroy who was the son of Hugh and Bridget, was born 1844 in Liverpool, and in 1869 married Jessie Fox, who was born 1847 in Edinburgh, Scotland, Jessie was brought up by her father Michael Fox in St Cuthbert, Midlothian, Scotland, after her mother died in June 1867, Richard and Jessie, started their married life at 9, Cheshire Crescent, Great Crosby, Waterloo, Seaforth, Liverpool, in the 1871 Census shows Richard aged 25 and Jessie aged 23, they shared their home with Jessie’s sister Charlotta Lucy Fox who was aged 29, she had moved from 14, Georges Square, St Cuthbert, Edinburgh, Midlothian after a request from Jessie, to come and stay, while they set up home, there was also a General Domestic, Ann Jane Corlett aged 28, who was from Castletown, on the Isle of Man. 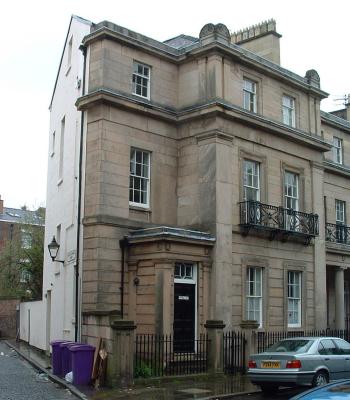 In 1872 Richard and Jessie moved house to 3, Percy Street, Liverpool, which was a larger house, more in line for a family, along with this move Jessie’s sister, Charlotta, returned back to Scotland, to look after her father, who had become very ill. Richard and Jessie were the driving force in this family being both staunch Roman Catholic and both coming from good middleclass backgrounds; their first child was born in Waterloo Hospital, Liverpool in June 1871 and they named her Charlotte Mary Louise, after Jessie's sister Charlotta, then in 1873 Jessie gave birth to a second girl Josephine Bridget, who was named after her Grandmother, (Bridget). Josephine was also born in Waterloo Hospital, Liverpool, because Jessie had complications with her at birth.