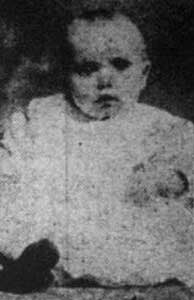 She was the daughter of a Swedish father, Oscar Walfrid Theodor Johnson (b. 1882), and a Finnish mother Aliina Vilhelmina Backberg (b. 1884). Her father had come to the USA in 1901 and worked as a journalist, in a bowling alley and as a barman whilst her mother had arrived in the USA around 1905; they were married on 6 April 1907. She had one elder sibling, her brother Harold Theodor (b. 1908).

In the months prior to her birth Eleanor's family appeared on the 1910 census living at 254 Sixth Avenue in St Charles, her father being described as a worker in a bowling alley.

Eleanor, her mother and brother returned to Finland in early 1911 to visit her dying grandfather; he died before the party reached there. With plans to return to America her mother wrote to her father in Illinois, informing him that they would be travelling aboard Titanic and that she expected to be in New York on 18 April.

For the journey her mother was escorting two Swedish girls across the Atlantic; the identity of the pair is debateable as the Chicago Daily Journal (17 April 1912) and Chicago Daily Tribune (18 April 1912) states that they were the sisters of her father. This clearly isn't the case as there are no passengers matching that description it is generally regarded that the two women were Helmina Nilsson and Elin Braf, both from her father's birthplace of Ramkvilla where she also visited with her mother and brother.

On the night of the sinking her mother took she and Harold to the upper decks, accompanied by their two charges. Mrs Johnson and her children are believed to have escaped in one of the aft starboard lifeboats but in which one is not clear (possibly lifeboat 13 or 15); she and Eleanor climbed in, followed by Helmina. Elin Braf, who was holding on to little Harold, remained on deck frozen in fear and would not follow. Alice had to call out for Harold and eventually the young boy was pulled from Elin's arms and pushed into the boat, Elin remaining behind. Although Eleanor was too young to have any memories of the sinking, she would state in later years that she was haunted by a memory of being held in her mother's arms whilst at a great height, surrounded by people and with many hands reaching around her and the sounds of screams. She later attributed this vision to an early-life memory of her time on Titanic.

Eleanor's father received word via telegram that his wife and children were safe and being cared for in St Luke's Hospital in New York and fainted in a dead stupor, overcome with emotion. Not wishing to wait any longer he asked those in his community if he could borrow the money for his fare to New York. Instead on loaning him money, charitable souls raised funds of over $100 for him to travel to New York and return with his family. Back in America Eleanor and his family resettled in St Charles and in 1913 she and her brother Harold were gifted with a sibling in 1913, Herbert. Sadly her father Oscar died on 31 October 1917 aged 35 and her mother was remarried in 1918 to Hans Thorvald Amundson (b. 1881), a Norwegian man. The marriage was tragically brief and Amundson died less than a month later on 23 December. However, Eleanor gained a half-brother from this union, Vernon Hans Amundson (b. 1916). Her mother took another husband in 1920, dairy farmer Carl Oscar Peterson (b. 1885) who was a widower, bringing to his second marriage four step-siblings for Eleanor: Clifford, Einar, Hedwig and Esther. Another half-sibling would also come from the marriage, Irene (b. 1925).

Eleanor later worked in a watch factory in Elgin, Illinois. It was here that she met her future husband, Delbert Earl Shuman (b. 13 September 1909), a native of Elkhart, Indiana and who was of mixed Swiss and German ancestry. The couple were married and made their home on Liberty Street, Elgin, appearing there on the 1940 census. Whilst Delbert still worked in the watch factory, Eleanor was now working as a telephone operator for the Telephone Company and continued in that role until her retirement in 1962. Their only child, Earl Delbert, was born on 6 July 1944.

During the 1950s Eleanor, her mother and brother Harold were guests at screenings for both Titanic (1953) and A Night to Remember (1958). She was also a guest of honour at two screenings for Titanic (1997), experiences she found emotionally draining and she was also the only Titanic survivor that director James Cameron met. She was interviewed for radio, television and newspapers countless times and was called upon to sign endless autographs. She also attended several conventions of the Titanic Historical Society and was aboard a special cruise to the wreck site in the late 1990s.

Eleanor became a widow when her husband Delbert died on 2 September 1981. She lived at her own home in Elgin, Illinois for the remainder of her life before she died in the Sherman Hospital in Elgin on 7 March 1998 aged 87. She is buried at Lakewood Memorial Park, Elgin.