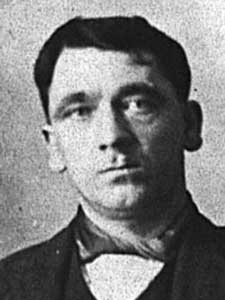 Coming from a Roman Catholic family, he was the son of William McGough, a shipyard riveter, and Margaret Hanna of 62 Fleet Street. The second child to bear the name, his elder brother Francis had been born in February 1884 but died in June 1885 as a result of measles. His parents had spent a portion of their lives living in Govan, Scotland from the mid-1860s to the early 1880s and where at least five of their children were born. By 1901 Francis’ parents were living at 8 Dock Lane in Belfast but he was not listed there and his whereabouts are uncertain.

A small man standing at 5’ 2½”, he had black hair, blue eyes and a fresh complexion, sporting two tattoos: a bracelet on the wrist and a star on the back of his left hand.

Giving his address as 66 Marine Street, on 29 January 1908 in Belfast’s St Patrick’s Church, McGough was married to Sarah Johnston (b. circa 1891) and their son Patrick was born in August the following year. Daughter Margaret arrived in October 1912 and was followed by William in April 1915, Sarah in March 1917 and Mary Jane in April 1918.

McGough’s ship prior to Titanic had been the Black Head. He joined Titanic at Belfast for the delivery trip to Southampton where he then disembarked.

The story handed down through the family is that he was supposed to sail from Southampton to New York as well as on the delivery trip but he became unwell in Southampton and was taken off board - a decision that probably saved his life.

Frank McGough is known to have worked at sea into the 1920s but his later activities remain obscure. He died in Belfast on 9 November 1956 aged 70.