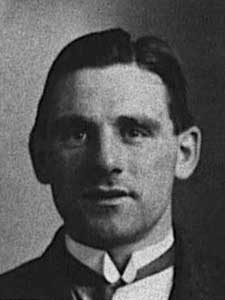 John James Kirkpatrick was born in Liverpool, Lancashire, England on 20 January 1892 and was baptised in St Mary’s Church four days later. Hailing from a Roman Catholic family, he was the eldest child of Andrew Kirkpatrick and Ann Jane Gill. He had two younger sisters.

John’s father apparently died when he was a child, his mother being a widow by the time of the 1901 census when the family were living at 90 Vauxhall Road, Liverpool. His mother remarried in 1902 to James McCloskey, a mariner originally from Derry in the north of Ireland; through this second marriage John gained several half-siblings.

John went to sea as a young man and served aboard a host of different ships, including; Lake Champlain, Haverford and Empress of Britain. By 1911 his family lived at 10 Prussia Street in Liverpool although he was not listed there at the time, presumably at sea.

In April 1912 he was serving as a quartermaster aboard the eastward-bound voyage of the Carpathia when that ship rescued the survivors of the Titanic.

Kirkpatrick continued working at sea after the Titanic disaster, serving with the merchant fleet during WWI. In October 1915 he married Edith Peers (b. 1891) and had three children.