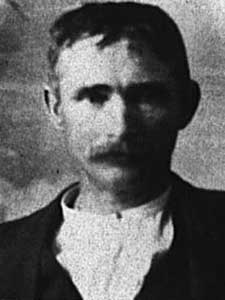 Thomas Bartley was born at 48 Trafalgar Street in Belfast, Ireland on 24 October 1876.1 Hailing from a Church of Ireland family, he was the son of Robert William Bartley, a smith’s assistant, and Jane Green.

Described as a seaman, Bartley was married in Belfast’s Trinity Church on 30 June 1900 to Sarah Jane McGurk (b. 30 November 1879). Their son Thomas was born in November 1900 and that lineup of the family appears on the 1901 census living at 40 Hanna Street in north Belfast, with Bartley being described as a shipyard labourer. A daughter named Jane arrived in April 1903 followed by another daughter in August 1908, Agnes. Sadly, Agnes died aged eight months on 3 April 1909 following complications from bronchitis.

When Thomas appears on the 1911 census he was boarding at the home of his sister Margaret Linstrom and her family at 65 Blythe Street, Belfast; he was then described as a sailor.

Bartley’s ship prior to Titanic had been the Lord Antrim. He joined Titanic at Belfast for the delivery trip to Southampton where he then disembarked.

In years after the sinking Thomas Bartley alternated between working ashore and at sea; he and his wife welcomed another child in January 1915, their daughter Margaret. With the outbreak of WWI Bartley worked for the merchant fleet and continued to do so in the following peacetime years. He and his wife spent the remainder of their lives living at 14 Trafalgar Street in Belfast. Widowed on 28 December 1952, Thomas Bartley rallied for a further five years before his own death on 30 December 1957. He and his wife are buried in Belfast’s City Cemetery (plot U1 182).