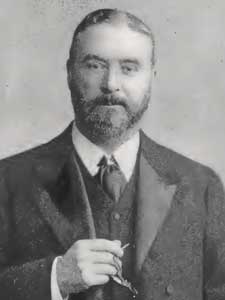 At the age of 16 he took up an apprenticeship with Liverpoool shipbrokers Imrie & Tomlinson. When the apprenticeship ended he travelled to South America. Returning to Liverpool he began a business trading to Australia and in 1867 acquired the defunct White Star Line which had run clippers from Australia to Great Britain. In collaboration with William Imrie he founded the Oceanic Steam Navigation Company initially trading on the Australian run but then, from 1871 to the United States.

Ismay developed a unique partnership with shipbuilders Harland and Wolff in Belfast. All White Star Line vessels would be built at Harland and Wollf.

Ismay married Margaret Bruce in 1859 , together they had three sons and four daughters

Ismay retired from the firm of Ismay Imrie and Co in 1892 but retained the chairmanship of the White Star Line, active control of the firm passed to his son Joseph Bruce Ismay.

Thomas Henry Ismay died at Dawpool near Birkenhead on 23 November 1899 and was buried in the Thurstanton Churchyard.