This four-part drama comes to us from the pen of Julian Fellowes, who created and wrote Gosford Park and, most recently, Downton Abbey. Both these well-known works are based on class divisions in Edwardian times, so when it comes to Titanic, I think we know what to expect.

Mr. Fellowes in an interesting chap. Born a mere commoner, albeit a well-off one, he married Emma Kitchener, who is the great-grandneice of the first Earl Kitchener (of WW1 Your Country Needs You fame), and also a Lady-in-Waiting. In 1998, he changed his name to Kitchener-Fellowes, and in 2011 was created Baron Fellowes of West Stafford, and sits in the House of Lords. The family chooses for their scions names like Peregrine, Launcelot and, obviously, Julian. So when he takes up his pen to describe class tensions, I think we must accept we are in the hands of an expert. One of the more interesting aspects of Julian’s scripts is that we are never sure exactly whose side he is on. He seems to identify sympathetically with, say, middle-class lawyers, but they are moving into / among the aristocracy – much to the alarm of those already there. He likes to portray some servants as having an unusually close relationship with their masters and mistresses, leading to highly unlikely situations as when, in Downton Abbey, a footman devotedly follows the heir into the WW1 trenches, and matily inquires whether his master has heard from (Lady) “Mary” recently, as they plough through the mud and bullets. The young master does not haughtily correct this breach of etiquette – because he’s not a proper toff, you see? However, the real point is that even if the middle-class (and reluctant) heir didn’t reprove the matey servant / batman, the latter would never have referred to her as just “Mary” in the first place. However, leaving aside such deconstruction, it is of course impossible to write a spoiler review for any Titanic production, but you may be alarmed to hear that the great ship is going to sink no fewer than four times in this drama. Every week, down she goes. I only hope that the teenage girls, to whom I had to supply Kleenex in the cinema during Cameron’s Titanic, are better-prepared this time. Somehow, however, I don’t think they’ll need the tissues, quite apart from the fact that they must now be nearing 30. There isn’t really anyone to care about in this drama. That is not because there are few characters. Indeed, over the series we are to be overwhelmed with over eighty of them, all with different backgrounds, prejudices, intrigues, and secrets, which is bad news for those of us with low-attention thresholds. However, their situations in life are very heavily telegraphed indeed by the script, so we are not likely to get in a muddle with dialogue like this.

“No-one is as morallyindignant than a beauty on the wrong side of 40.” (a foxy Mme. Aubart on the impossibly-odious Lady Manton).

“I am not a Democrat, as you know, but at times like this, you may sit.” (Guggenheim to his valet as they await their doom).

“Nobody stops you going into second class.” (lawyer’s Irish wife with massive chip on shoulder, after enduring a ghastly tea in first class with her husband’s employer, when asked sweetly by Lady Manton if she can find her way back to where she belongs).

I could go on. 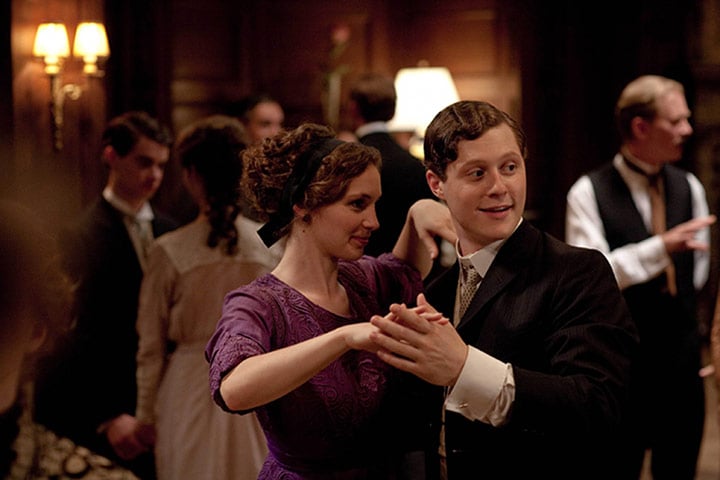 The production values cannot compare with Cameron’s Titanic, of course, as it was apparently filmed in land-locked Hungary, and only had a budget of £11m – which seems a staggeringly profligate amount to me as I scratch through my pennies trying to keep body and soul together, but I know it is comparatively small. This leads to a rather closed-in feel, and there is a definite lack of water, which is something of a drawback. We get a few shots of glassy sea, and a stoker stares in horror as the sea bursts in, but it doesn’t seem very much worse than when my cistern overflowed through the kitchen ceiling last summer. It is easy for Titaniacs to carp, of course, especially as the usual clichés are there in abundance; locked gates, keeping the boat deck free of “unnecessary” lifeboats, rotten Ismay, someone pointing out that it is women and children first, not women and children only etc. But these are necessary dramatic devices, without which it would be even more anodyne than it is. Great hats, though.

You may still be wondering why everyone has to stagger through the disaster four times. Well, every week, the sinking will occur to illustrate the different lives, perspectives and fates of the 80+ characters, and the last episode will tie up all the loose ends. We hope. I can see that a new approach is obviously needed by anyone making yet another version of the tragedy, but I think this one could contain within it the seeds of its own downfall. Certainly, I was bewildered from start to finish.

I was heartened, however, by the reappearance of Downton Abbey’s evil Mrs. Bates – reprised magnificently by Maria Doyle Kennedy, as the lawyer’s bitter Irish wife. She looms threateningly over her much smaller, uglier, and deferential husband, so this could run and run. Downton’s Lady Sybil also seems present and correct, albeit now as part-time suffragette Lady Georgiana Grex, daughter of the despairing Lady Manton, and daringly falling in love with American “new” money which she should, of course, despise on principle. Not because it is new, but merely because it is money. But there are three weeks to go, and there are plenty of chauffeurs on board. So she may yet see the error of her ways, live up to her principles, defy her mother, and do a “Rose”.

I understand the series will show in the USA and Down Under closer to the Anniversary . You’ll all probably watch it anyway, but don’t say you haven’t been warned.