She was the daughter of Menel1 John Winfield (1852-1932) and Maria Gallon (1855-1943) who had married in Hampshire in 1878. Her father, a general labourer was a native of Great Ponton, Lincolnshire whilst her mother was from Newcastle-upon-Tyne, Northumberland.

The family appears on the 1891 census living at 13 Victoria Road, Netley, moving to 5 Arthur Terrace by the time of the 1901 census. Ada wasn't present with her family and was listed elsewhere as a servant (kitchen maid) at Rownhams House in Rownhams, Hampshire in the employ of a wealthy family.

She was married on 29 June 1908 to Charles Valentine Clarke (b. 1883), a dairyman and native of Cosham, Hampshire. The couple would have no children and appeared on the 1911 census living at Sea View on Solent Road, Drayton, Hampshire.

Ada and her husband boarded the Titanic at Southampton on 10 April 1912 as second class passengers (ticket number 2003 which cost £26) and their last address was Colaba, Grange Lane, Netley, the home of her parents. They were destined for San Francisco, California where they intended to settle; Ada had a sister living at 142 Ox Point, Richmond, California.

Ada survived the sinking, escaping in lifeboat 14 but her husband was lost in the sinking.

Safe in New York, but now a widow, Ada elected not to continue to California. She gave an emotional interview to the New York Press:

Mrs Ada M. Clarke, one of the many women made widows by the Titanic disaster, went to the White Star Line offices yesterday and engaged passage to England. She and her husband were on their way to California to make their home. She was a guest Thursday night last in the home of the Rev. G. T. Baker, in Ozone Park, L. I. Mrs Clarke, who was married four years ago, told her experience and praised the bravery of the men.

"I was in one of the three boats lashed together," said Mrs Clarke, "when one of the officers unlashed one of them and taking all but two of the seamen, rowed off to rescue another boat, which was crowded to the sinking point. 'Be brave women,' the officer said, as they rowed away. And they were brave. The women and the two men manned the oars until we were rescued later. How long, I don't know, but it seemed many hours."

"The women wouldn't leave the men on the ship until we were forced to. We shouldn't have gone unless they made us. Ah, the men were brave; they were splendid; and so were the women. We were in the last boat, I think; anyway, it was boat No. 14, I'm sure it was the last boat launched. I saw the ship sink slowly. No, I heard no pistol shots."

Her husband stood at the rail of the second deck and she saw him go down with the ship.

"He made me leave him," she said brokenly. "I shouldn't have done so otherwise. Oh, they were brave and splendid all the men. They died like brave men. And there floated out across the water the strains of 'Nearer my God, to Thee.' I could hear it and saw the bandsmen kneeling too."

"How long after we were launched did the ship sink? Oh, oh, I can't tell. I don't know. How could I remember such a time?"

Then, with Mr and Mrs Baker, Mrs Clarke went bravely from the office to make further preparations for her journey back home to England. Every bit of furniture she possessed was lost on the ship. Mrs Clarke said she did not know Colonel Astor or Major Butt. Asked if she saw the iceberg she said "Yes, yes--it was big--and black--black."

Ada returned to Britain on board the Celtic on 25 April 1912. The following day a memorial was held in her late husband's memory:

Though a general memorial service for those who lost their lives in the Titanic disaster was held in the Wymering Church on Sunday, a special service was held on Thursday evening in the Chapelon Ease, High-street, Cosham, to mark the deep sense of regret at the tragic end of Mr Charles Valentine Clarke of Cosham, who was one of the victims of the awful catastrophe. Mr Clarke was a member of the Cosham Church of England Men's Society, and it was in connection with this organisation that the service was held. Canon Scott, M.A., Rector of Havant and Rural Dean, conducted the sad service, assisted by the Rev. J. W. Fell-Middlehurst, curate-in-charge. The hymns "God moves in a Mysterious Way," "Nearer, My God, to Thee," and "On the Resurrection Morn" were sung, Mrs Daysh presiding at the organ. In the course of a touching address Canon Scott said that Mr Clarke was only enrolled a member of the Society on Good Friday Morning, and sailed with his wife on the following Wednesday. He helped the women and children into the boats after the collision. Mrs Clarke was saved.
(Portsmouth Evening News, 26 April 1912)

Ada never remarried and remained close to her parents, later living with them at Mayarda on Archery Road, Woolston, Southampton. She would continue to remember her late husband in years after the sinking:

ECHO OF THE TITANIC DISASTER
MRS C. CLARKE, of Cosham, wishes to place a brass plate on the north wall of St Peter and Paul's Church in memory of her husband, Charles Valentine, who went down on the ill-fated Titanic.
(Hampshire Telegraph, 28 March 1913)

Ada's father died in 1932 and by 1939 she was still residing at Mayarda with her mother and sister May West; at the time she was described as a housekeeper. Her mother later died in 1943.

Ada Clarke died on 8 February 1953 aged 69 and is buried in Holy Trinity churchyard, Weston Lane, Southampton. Her late husband is commemorated on her grave. 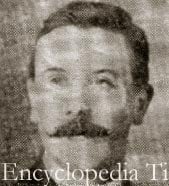