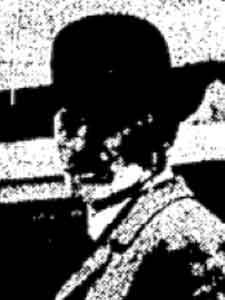 Mr Andrew Orr Cunningham was born on 3 July 1873 in Shotts, Lanarkshire, Scotland, a small town midway between Glasgow and Edinburgh.
He was the son of David Cunningham (b. 1848), a joiner, and his wife Jeanie Thomson (b. 1852). His father was Glaswegian by birth and his mother was born in Largo, Fife and they were married in Edinburgh on 11 October 1872.  He had two known siblings, Elizabeth (b. 1875) and Jessie (b. 1880).

He first appears on the 1881 census living in St Andrew, Edinburgh but there is no sign of he or his family on the 1891 and 1901 census reports.

Listed as a sea steward, he was married in St Luke's Church, Camden, London on 21 August 1901 to dressmaker Emily Susan Jane Jones (b. 7 August 1873 in Islington, London), daughter of William Edward Jones, a wholesale pickler, and Emily née Baker. Both their address was stated as 30 Gaisford Street in St Pancras, Emily's parents' home.  The couple would have two children: Sidney Andrew (b. 1 June 1902) and Gloria (b. 23 November 1906).

Andrew was absent from the 1911 census, most likely at sea, but his wife and children were shown living at 60 Charlton Road, Southampton.

When he signed on to the Titanic on 4 April 1912 Cunningham gave his address as 60 Charlton Road, Southampton. His previous ship had been the Oceanic and as a bedroom steward, he received monthly wages of £3, 15s. He was stationed on C-deck aft, charged with nine staterooms, and the passengers he served included John Bradley Cummmings and his wife Florence, Walter and Virginia Clark, WT Stead, Edith and Margaret Graham and Miss Graham's governess Elizabeth Shutes.

On Sunday 14 April Cunningham had enjoyed an afternoon break from his duties. That evening he had just begun his watch and was stationed at the forward end of the D-deck first-class accommodation "to answer bells," that is to answer calls from passengers. He had returned to the steward's Gloryhole on E-deck and was lying on his bunk when the ship struck and another stateroom steward advised him to get up. He returned to D-deck where he answered a few calls, instructing a handful of ladies on how to put on their lifebelts. He descended to E-deck to check on passengers there and whilst in that vicinity took the opportunity to look into the stairwell leading from that deck down to the post office; he noted that water had already engulfed that area. During his reconnaissance of the post office he left to answer another call and during that time other stewards had gathered to their respective stations, Cunningham returning to his own station on C-deck (around 12.30 am), most of his charges already having being readied and left their cabins and with only three left by that point.

Still having received no official orders by that time, only word-of-mouth instructions, Cunningham waited in that area; during that time he encountered three of his charges: John Bradley Cumings, who had returned to his stateroom for an overcoat, Walter Miller Clark who came to his stateroom for a lifebelt and William Stead, the latter gentleman asking Cunningham how to fasten his lifebelt. Cunningham helped the elderly Stead into his lifebelt and then went about his business.

Cunningham did not make clear what he did next but by the time he arrived at the boat deck to go to his assigned lifeboat, number 7, all the functioning lifeboats were clear of the ship. At around 2.00 am he and his mate Sidney Siebert threw themselves into the water and swam "about three-quarters of a mile" away from the side of the ship, fearing the suction. From that vantage point, they watched the Titanic sink.

Shortly after the ship foundered Cunningham turned his attention to finding a lifeboat; he heard one in the distance and called to it before swimming in its direction. The occupants of lifeboat 4 hauled he and Siebert into the boat, he identifying Walter Perkis, Samuel Hemming, John Foley and two firemen and a galleyman among the crew already in the boat, the rest being women, two of who being his charges Florence Cumings and Virginia Clark. Cunningham states that Sidney Siebert died not long after being hauled aboard and shortly after the lifeboat encountered Frank Prentice and hauled him aboard.

Mrs Cumings, recognising her steward, immediately put him to work and had him circulate amongst the occupants of the lifeboat to identify them, the reason for doing so remains unclear. Suffering from the bitter cold, he took an oar and helped row throughout the night and stated that he sighted Carpathia about 4-5 miles away at around 7.30 am.

Cunningham resumed his career at sea and sailed the dangerous waters of WWI. During peacetime he worked mainly for Cunard and spent most of the 1920s working as a bedroom steward aboard the Berengaria, with a brief spell aboard the Aquitania in 1922. He was still listed on the Berengaria by April 1930 and was described as standing at 5' 11" and weighing 190 lbs.

Andrew Cunningham and his family later lived at 35 Upper Brownhill Road in Nursling, Hampshire where he remained for the rest of his life. He passed away aged 58 in the Royal South Hampshire Hospital on 1 September 1932 and was buried in Hollybrook Cemetery, Southampton (section L11, plot 138).

His widow Emily remained at 35 Upper Brownhill Road for a number of years before she moved to Darlington Gardens in Southampton where she died on 28 April 1962 aged 88.

His son Sidney later worked as a brewery representative and was married in 1930 to Constance Alice Jelmoni1 (b. 17 July 1902). They later moved to Conway, Wales for a number of years, had no children and returned to Southampton where they eventually divorced, with both remarrying. Sidney's second wife was Molly Robson, whom he married in 1957.  Sidney remained in Southampton where he died on 26 August 1984.

Andrew's daughter Gloria was married in 1934 to Charles Joseph Cahalan (b. 29 July 1903), a shipping freight clerk, and they lived in Southampton, remaining childless. Widowed in 1972, Gloria died in Southampton on 15 July 1992.