Anna Elisabeth Judith Dyker, née Andersson was born 24 November 1889 in Massachusetts.1 Her parents were Carl August, a carpenter born 7 June 1848 at Åker, Sweden, and Matilda Johanna (nee Johansson; she had been born 3 November 1858 at Synnerby, Sweden) Anderson, who lived in Connecticut. Her parents had married around 1882 in Sweden and had come to the USA in 1888. There is a chance her parents were the Karl August Andersson and Mathilda Johanna Jonsdotter who had married 28 January 1883 at Hjortsberga, Kronobergs County, Sweden. Her known siblings were Carl Oskar Arvid, b. 31 August 1883 in Jönköping (d. 3 September 1883) Carl Gunnar Fritiof 'Fritz', b. 8 April 1885 in Jönköping Västra, Sweden, and Gustav William, b. October 1891 in Connecticut (or Massachusetts).

She was training to become a singer and was also giving music lessons and had attended Yale Music School.

She was married around 1909 to Adolf Fredrik Dyker (b. 1888), a native of Stockholm who worked as a tram conductor. They lived at 468 Washington Street, New Haven, Connecticut and appeared on the 1910 census living at the home of Anna's parents in Orange, New Haven. By late 1911 it is believed they were building their own house in New Haven but the death of Adolf's father on 1 December 1911 compelled the couple to travel back to Sweden to settle his estate.

It was on their return from Sweden that they boarded the Titanic at Southampton as third-class passengers (ticket number 347072 which cost £13, 18s).

After the accident, Adolf placed Anna into a kissed her and stepped aside. Dyker died in the sinking. His body, if recovered, was never identified.

From New York she sent a telegram to New Haven, "Liza saved, Fred lost". To ministry of foreign affairs in Stockholm she wrote:

"I lost my husband and everything I owned, I was wounded when I was brought from Titanic, that together with sorrow and worries has completely broke me down. My health have not recovered, I have tried to done some work to earn my living, as I'm now living in my parents home and my father is old and cannot earn too much, I cannot fully be a burden to him, but my strength doesn't allow me to do further work."

From the Red Cross files: 131. (Swedish) The husband was drowned. His wife was saved. He was twenty-three years of age, a street car conductor in New Haven, earning $14 a week, was considered an unusually valuable employee, and was in line for rapid promotion. His wife, American born, is twenty-two years of age. She has never been in robust health and, after the wreck, was confined in bed for many weeks. She had been studying in the Yale Music School, and occasionally sang in churches. As a result of her experience her voice left her entirely and there was uncertainty for some time that she would ever regain it. She is making her home with her mother who is in moderate circumstances. From other American relief funds she has received $1,161.20 ($1,200)

Anna also received $300 from "The Women's Relief Committee", New York. No papers on damage claims paid exists, but she sued White Star for $4000 for lost luggage and $14000 for loss of her husband.

After the disaster Elisabeth Dyker continued as a music teacher, she remarried a few years later to John Alfred Josephson (b. 1889), a clerk at Westin Electric. He was a native of Finland, and settled in New Haven, Connecticut. Anna and her husband had two sons: Kenneth Alfred (b. 13 June 1917, d. 7 June 1999) and John W. (b. 9 August 1919). The family later resettled in East Orange, New Jersey sometime before 1930 and Anna was made a widow again when her husband died in 1937; she was not remarried and later lived in Fort Lee, Bergen, New Jersey for many years.

Anna spent the last twelve months of her life living at 3 Seneca Place, Haworth, Bergen, New Jersey. She died at her home on 19 February 1961 aged 71 and was buried Glendale Cemetery, Bloomfield, Essex, New Jersey with her second husband. 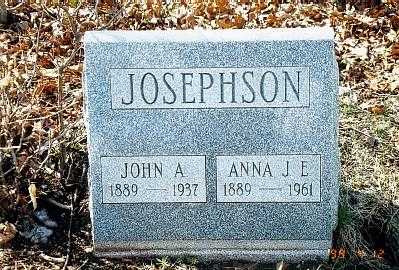