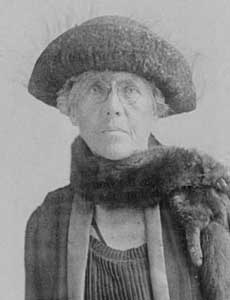 She was married to a man named Percival Cadby (b. 1861). Little is known about Cadby but it is acknowledged that he was English-born, possibly hailing from Birmingham, and he had come to the USA in 1871. Anna and Percival had three children: Mathilda Andrews (b. 1885, later Mrs Carl Andrew Weiant), Kenneth Scudder (1888-1893) and Robert Andrews (b. 1891). What became of Percival Cadby is not clear.

Anna was married again around 1898 to John Clinton Hogeboom (b. 1837), a lawyer. Born in Hudson, New York, Hogeboom had also a previous marriage, to Clara Esselstyn (b. 1839) and had two children, Sarah Vedder (b. 1864) and Henry (b. 1869). Hogeboom and Anna would have no children of their own and continued to reside in Hudson; Anna was listed on the 1900 census living at the home of her parents. She was widowed in 1908.

No stranger to travel Anna had, at the age of eighteen spent time travelling Europe, visiting France, England and Switzerland. She had been travelling in France and Italy since November 1911 and was returning to Hudson with her sister Cornelia Andrews and niece Gretchen Longley. The three ladies boarded the Titanic in Southampton as first class passengers (ticket number 13502). Mrs Hogeboom occupied cabin D-11.

Mrs Hogeboom later recalled being awakened by a crash and reportedly saw ice crystals apparently deposited through open portholes. Upon asking a steward what was the matter, the ladies were reassured and told to go back to bed but the continued commotion outside their cabin caused them to stir again and they were soon told to, as a precaution, put on their lifebelts. Hurriedly readying themselves, the three ladies only threw fur coats over their nightclothes and donned their lifeblets before heading to the boat deck where they waited for what they described as the fourth lifeboat (reported to be lifeboat 10):

"..The discipline on the Titanic, in a way, was good... No one hurried and no one crowded. We waited for the fourth boat and were slowly lowered seventy-five feet to the water. The men made no effort to get into the boat. As we pulled away we saw them all standing in an unbroken line on the deck..."

Once the boat was launched the occupants of the boat noticed a lack of able seamen. Mrs Hogeboom recalled that two male passengers, an Asian and an Armenian, were unable to row and several of the women, including her niece Gretchen, took to the oars.

From her vantage point in the lifeboat Mrs Hogeboom was astounded at how much the bow of Titanic had settled into the water. She later described hearing blasts, which she attributed to boilers exploding, following which the lights on the ship were extinguished and the vessel then broke in two.

Mrs Hogeboom, like many survivors, commented on the sounds of those struggling in the water as horrific. As time passed and the cries subsided Mrs Hogeboom saw much ice around her, seeing one ice field in the distance which she believed was about a mile in length. In one of the last lifeboats picked up by Carpathia, Mrs Hogeboom, her sister and niece refused offers to stay in a stateroom as there were others people in much worse condition. They instead slept in the lounge.

Clad only in a nightdress with a fur coat covering her, Mrs Hogeboom suffered from the cold and had all but lost her voice by the time she arrived in New York. Upon their arrival the three ladies went to the home of Mrs Arthur Flack, Anna's sister Roberta, at 458 Central Avenue, East Orange, New Jersey.

Following the disaster Anna continued to travel. Her 1922 passport describes her as standing at 5' 3" tall, with a fair complexion, a round face set with grey eyes and brown hair that was greying. A distinguishing feature was a scar on her left cheek which was the result of a dog bite.

She appeared on the 1920 census living with her daughter and her family in Madison, Ohio and the 1930 census with her son Robert and his family in Hillsdale, Columbia, New York. She was back in Ohio with her daughter by the time of the 1940 census. One voyage she took in 1925 aboard De Grasse put her address as 34 Cambridge Street, East Orange, New Jersey and another in 1929 aboard Rotterdam has her address as 372 Central Avenue, East Orange.

Anna died in Chatham, Columbia, New York on 7 October 1947 aged 87 and she was buried in Cedar Park Cemetery, Hudson, New York. Her sister Cornelia is buried in the same cemetery.

Her daughter Mathilda died in Licking, Ohio on 1 November 1965.

Her son Robert was married to Geneva Gullberg (1898-1994) and their son, Robert Jr, died during WWII on 13 November 1942 and is buried in Manila America Cemetery in Manila, Philippines. Robert Snr later died in 1949.