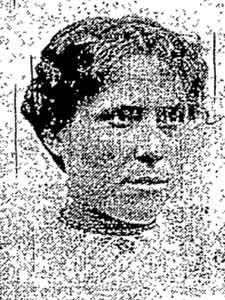 Anna Sofia Sjöblom was born on 14 April 1894 in Finland the daughter of Gabriel Gustafsson Sjöblom, a woodworker (b. 16 September 1862 at Oravais, Finland) and Johanna (née Nilsdotter; b. 17 July 1867 at Munsala) Gustafsson. Her parents had married 1 June 1890.

The family lived in Munsala, Nicolaistad, Vasa County, Finland and it is likely she and her siblings were born there.

Anna was travelling to her father, who had come to the USA in 1904 and who lived in Olympia, Washington.  He was employed by Simpson Timber Company, where her uncle Daniel also worked.

She probably travelled the same way as Jakob Alfred Johanson and Jakob Alfred and Karl Johan Wiklund. Jacob Wiklund was in the same class at school as Anna. They left Hangö on March 30, 1912, however, none of them is on the passenger list for FÅA's Polaris which sailed from Hangö to Hull on April 3.

The group were originally booked on the Adriatic but were transferred when their sailing was cancelled due to the coal strike. Anna did not understand English, so Johanson who had spent a long time in North America helped for her and the Wiklund brothers during the trip.

She shared a 6-berth cabin (#134) on D-Deck with Velin Öhman amongst others.

14 April 1912 was Anna'a 18th birthday and that night she lay fully clad on her bed when the collision occurred, but she did not care too much since she had been seasick during the whole trip. When she tried to reach the boat deck together with another Finnish girl, they got lost and reached the 2nd class promenade on A deck and had to climb a crew ladder. That was near to the à la Carte restaurant and could see the laid tables through the windows. About 1.30 according to Anna she entered a lifeboat. All three of her companions died in the sinking.

After her arrival in New York, she was taken to the Lutheran emigrant home and went a week later by train to Olympia. For part of the trip, she travelled with Oscar Hedman, Berta Nilsson and Carl Olof Jansson from Sweden. Anna Sjoblom after her rescue.

Her mother and brother came to the USA in 1915.