She was the oldest daughter of Charles Simeon Franklin and Elizabeth Ann Franklin (née Chew). The family lived on Maitland Street, St. Paul’s Bedford. She had two sisters: Mary Albina (b.1867) and Sarah Emma (1870-1962), and a brother Charles (b.1875).

Annie was married to Tom Snell (Henry) Grierson-Kerswell2, an 'accountant', on 29 August 1885 at the Parish Church, Liverpool. Tom address was given as Carter Street and Annie’s as Huskisson Street Liverpool.

Annie and Tom had two daughters.  The eldest Annie Grierson-Kerswell was born on the 16 July 1886 when the family were residing at New Ferry Lower Bebington Wirral Chester, she was christened 28 September 1886 at St. Paul's Church, Bedford. Tom was now working as a Marine Surveyor. In later years Annie would add the name Gladys as her first name.  She married Seychelles-born divorcé James Eugene Prentis (1874-1947)3 on 17 November 1908 in Boston, Massachusetts.   Gladys died in 1929 and her death is registered in Boston.

In the 1891 census the family of three are listed living at 6 Union Terrace, Liscard, Wallasey, near Liverpool. Staying with them was Annie's sister Mary. Tom is listed as a "Ship's Husband" (a form of maritime agent).

The younger daughter Dorothy Albyne Grierson-Kerswell was born on 28 September 1893 at 11 Maitland Street, St. Pauls’, Bedford. She was later baptised on 30 August 1895 at St. Margaret’s Church, Toxteth Park, Liverpool.  Dorothy would remain a spinster and worked as a school teacher. She died on the 15 May 1981 at Wensleydale, North Yorkshire, England.

In 1898 (or 1895) Tom emigrated to the United States, finally settling in Pennsylvania.  It is not known if Annie joined him at that time.

Annie Robinson had previously served aboard the Port Kingston (Elder Dempster Lines) and more recently with the Canadian Pacific Line. Between 1906 and 1909 she appears regularly in crew lists for the Lake Champlain, her home address at this time given as 3 Westbank Avenue, New Brighton, Liverpool.  On 6 May 1909, she was onboard the Lake Champlain en route from Liverpool to Montreal carrying 1,000 passengers when it struck an iceberg.  The damaged vessel limped to St John's for repairs. When she signed-on to the Titanic on 6 April 1912 she gave her address as 128 Shirley Road, (Southampton), probably a lodging house. Her last ship had been the Lake Manitoba. As a stewardess, she received monthly wages of £3 10s. She gave her age as 40 (she was 47)

After the Titanic struck the iceberg Robinson assisted the seven ladies, a maid and a governess she had attended as a stewardess.  All were saved.

We had already got the blankets and the lifebelts out of the rooms which were unoccupied at the foot of the staircase. Mr. Andrews said to me, "put your lifebelt on and walk about and let the passengers see you." I said to him, "It looks rather mean," and he said, "No, put it on," and then after that he said to me, "Well, if you value your life put your belt on."

She was rescued in lifeboat 11 which she said left the Titanic at 1.40pm.

After her rescue, she returned to England with the other surviving crew aboard the Lapland.  After they berthed in Plymouth the stewardesses were photographed as a group. Annie was also photographed talking to smoke room steward James Witter. 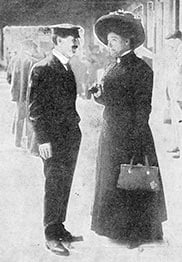 She was subsequently called to testify before the Board of Trade inquiry into the sinking of the Titanic (day 11).

Aboard the tender Galatea, which took them around the mercantile fleet, their Majesties made the acquaintance of a stewardess, Mrs. Robinson, one of the Titanic survivors. The King was immediately interested, and plied the stewardess with questions, but Mrs. Robinson seemed disinclined to speak of the calamity.

"It is the sort of thing one doesn't like to talk much about afterward," she said to him. "It was too terrible."

On 9 October 1914 she was aboard the SS Devonian.4 According to newspaper reports she was travelling to Boston to visit her daughter Gladys who had settled in Jamaica Plain with James Eugene Prentis .  As the ship travelled through thick fog Annie reportedly became very anxious leading to her apparently jumping from the deck to her death:

Friday night when the Devonian slowed down in a heavy fog Mrs. Robinson apparently became nervous, and the continual sounding of the whistle so worked upon her nerves that she feared another disaster.

She was last seen when she left the main saloon about 10:30 Friday night. The suicide was not discovered until yesterday morning when she failed to appear at breakfast.

Agreement and Account of Crew (PRO London, BT100/259)
United States Senate, Washington 1912. n° 806, Crew List
Wreck Commissioners' Court, Proceedings before the Right Hon. Lord Mersey on a Formal Investigation Ordered by the Board of Trade into the Loss of the S.S. Titanic
(1914) WOMAN LEAPS FROM DEVONIAN Boston Daily Globe 11 October 1914
1910, 1920 Federal census
Massachusetts, Marriage Index
BT334 Registers and Indexes of Births, Marriages and Deaths of Passengers and Seamen at Sea 0060/92