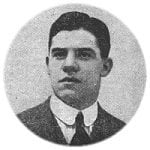 A racquet player, Williams began his career as a ball boy at London's exclusive Prince's Club before turning professional. In January 1911 he competed in and won the Open Championship of England, defeating Edgar Maximilian Baerlein; only a few months later he was the challenger for the World Championship against the titleholder, India's Jamsetji Merwanji. He won the first round at the Queen's Club and then in the second round played out a draw at the Prince's Club after he had already secured the one game he needed to claim the outright title, becoming the world champion.

Charles was married in the second half of 1910 to Lois Wilkins (b. 27 January 1888), a native of Chelsea, London and the daughter of carpenter and joiner John Wilkins and his wife Leah Stevens. Their first child, Eugene Charles arrived on 29 March 1911 1 and the family appeared on the census that year living at 2 Drury Road, Harrow, London and Williams was described as a racquet professional at Harrow School; their young son was by then still unnamed.

Williams boarded the Titanic at Southampton as a second class passenger (ticket number 244373 which cost £13) and was travelling to New York to defend his title against George E. Standing.

On the night of 14 April Williams left the squash racquet court at 10.30 pm and had settled in the smoking room. Following the collision he rushed out and saw the iceberg which he said rose a hundred feet above the deck and broke up amidships before drifting away. He is believed to have been rescued in lifeboat 14 but contemporary media initially reported him as among the lost.

Charles and his family later emigrated; they arrived in New York aboard Olympic on 29 July 1924 and made their home in Chicago. The family appear on the 1930 census living at 5524 Lakewood Avenue, Chicago and was described as a tennis instructor; he would live at that address for the rest of his life.

His widow Lois remained on Lakewood Avenue for a time before moving to Evanstown, Illinois where she lived out the remainder of her life. Having never remarried she died on 25 November 1959 and was buried with Charles in Rosehill Cemetery.