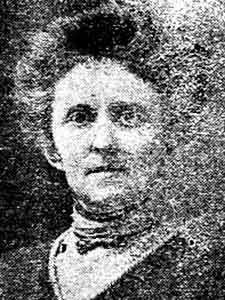 Mrs Edward Dale Appleton (Charlotte Lamson) was born on 12 December 1858 in New York City, the daughter of Charles Lamson and Elizabeth Robertson Marshall. Her father, who was a former dry goods importer later became the senior partner of the shipping house of Charles H. Marshall & Co., the proprietors of the noted Black Ball Line of Liverpool packet-ships.

In 1894, Charlotte married Edward Dale Appleton, the son of John Adams Appleton and Serena Parker Dale and a noted book publisher from Massachusetts. The couple lived in New York City, and later in nearby Bayside, New York (located in a section of what is now known as Queens, New York today). The Appletons had no children.

In 1912, Mrs Appleton travelled to England with her sisters, Mrs John Murray Brown and Mrs Robert C. Cornell to attend the funeral of another sister, Lady Victor Drummond, who had died there. Mrs Brown was a widow, and neither Mr Appleton nor Mr Cornell accompanied their wives to attend the funeral. Returning home, the three sisters booked passage on the Titanic and boarded in Southampton they occupied cabin C-101 . Mrs Appleton's ticket was No. 11769.

Colonel Archibald Gracie IV , who was also a passenger on the Titanic , knew the sisters well. Gracie's wife and the sisters were friends and Colonel Gracie had even been friends with Mrs Appleton's husband. Both Colonel Gracie and Mr Appleton attended St. Paul's Academy in Concord, New Hampshire. Gracie later wrote in his detailed book, The Truth About the Titanic :

"these three sisters were returning home from a sad mission abroad, where they had laid to rest the remains of a fourth sister, Lady Victor Drummond, of whose death I had read accounts in the London papers, and all the sad details connected therewith were told me by the sisters themselves. That they would have to pass through a still greater ordeal seemed impossible, and how little did I know of the responsibility I took upon myself for their safety. Accompanying them, also unprotected, was their friend, Miss Edith Evans , to whom they introduced me."

On the night of the sinking, the three sisters and Miss Evans were on the boat deck following the collision. During the final hours, Mrs Appleton and Mrs Cornell became separated from Mrs Brown and Miss Evans. The two sisters reached lifeboat 2 , which was among the last to leave the sinking vessel, and were helped into it. Boat 2 left the Titanic at about 1:45 am. Mrs Appleton sat beside Mr Anton Kink , a steerage passenger who was in the lifeboat with his wife and four-year-old daughter, and in front of Mrs Walter D. Douglas . Mrs Douglas and Miss Elisabeth Allen , who was also in boat 2, both remarked that, "Mrs Appleton and Mrs Cornell had been rowing and rowed all the time."

Meanwhile, on board the Titanic , Colonel Gracie found Mrs John Murray Brown and Miss Edith Evans and escorted them to the last boat to leave the Titanic . Seeing as there was only room for one more lady, Edith turned to Mrs Brown and told her, "You go first. You have children waiting at home." Mrs Brown was helped in and collapsible D left the Titanic at 2:05 a.m. Edith Evans would never find a space in a lifeboat and she went down with the great vessel when it sank at 2:20 am.

Aboard the Carpathia , the three sisters were reunited, and by a remarkable coincidence, found that their uncle, Charles H. Marshall, was a passenger aboard the rescue ship.

Back in New York, the families of the three sisters were frantic with worry and anxiety as there was some doubt expressed over whether Mrs Cornell was one of the survivors. The three ladies walked off the Carpathia together and into the waiting arms of their husbands, children and other relatives.

Following the sinking, Charlotte Appleton continued to live in Bayside, New York. She died on 25 June 1924 at the age of 65. Her husband, Edward Dale Appleton, died on 29 January 1942.