She was the youngest child of John Quincy McMillan (1826-1882), a clergyman, and Elisabeth Catherine Walton (1832-1923), natives of Chester, South Carolina and Virginia respectively. She had two siblings: Lydia Jeanette (b. 1853) and Daniel Walton (1859-1901). Elisabeth and her family appear on the 1870 census living in Pittsburgh. Following the death of her father in 1882 her mother never remarried and lived much of the rest of her life with Elisabeth until her death in 1923.

She was married on 13 February 1895 to George Alexander Madill (b. 29 June 1838), a distinguished Pennsylvanian-born jurist of Irish parentage, and she was his second wife and twenty years his junior. His first marriage was to Julia Peck (1840-1893) and with her had two sons: George (1867-1889) and Charles (1873-1916). Elisabeth and George settled together in St Louis, Missouri and had only one child, a daughter named Georgette Alexandra (b. 1896); the family appear on the 1900 census as residents of 4140 Lindell Boulevard in St Louis.

George Madill died on 11 December 1901 and Elisabeth was remarried in a low-key ceremony on 3 January 1904 to Edward Scott Robert (b. 31 October 1858), a lawyer originally hailing from Albemarle, Virginia who had been a close associate and friend of her first husband and a pallbearer at his funeral. The two continued to make their home in St Louis, appearing on the 1910 census still living at  4140 Lindell Boulevard before she was widowed for the second time on 13 December 1911.

Elisabeth and her daughter, hoping to quell their sorrows, decided to take a vacation to Europe. For their return to America they boarded the Titanic at Southampton as first class passengers (ticket number 24160 which cost £211, 6s, 9d). Travelling with her was her maid Emilie Kreuchen and her niece Elisabeth Walton Allen, the daughter of her sister Lydia. Miss Robert occupied cabin B3.
The four ladies were rescued in lifeboat 2. Elisabeth never remarried and continued to be a frequent traveller well into old age, visiting Japan and China amongst other destinations; her 1917 passport describes her as standing at 5' 6" and with light-brown/grey hair, hazel eyes, with a medium forehead and a fair complexion. Her address at the time was still 4140 Lindell Boulevard, St Louis. She travelled aboard the Olympic at least twice; once in August 1930 and another time in September 1932, both times stating her residence as Clarkesville, Missouri. In 1939 she was listed as a passenger aboard the Queen Mary. In October 1953 she and her daughter Georgette Mattei were passengers aboard the second Mauretania.

By the time of the 1930 census Elisabeth was living with her long-term housekeeper Laura Belle Harris (1863-1942) in Calument, Missouri. She was heavily involved in charitable projects, particularly those supporting young people and children, and she was one of the organisers of the YWCA in 1892 and she established the Underage Free Kindergarten in St Louis. Later she assisted in establishing a school for African-American children. She spent her last days living in Clarkesville, Missouri where she owned an estate. 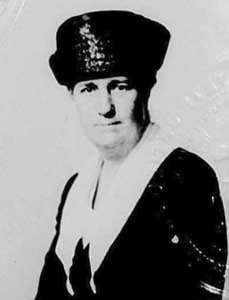 Elisabeth died on 15 January 1956 aged 87 in the Jewish Hospital in St Louis following a heart attack. She and her family are buried in Bellefontaine Cemetery in St Louis. Mrs Robert, always especially kind and thoughtful of her family's servants, took the highly unusual step of seeing to it that when three of her African-American servants died (Katherine Harris in 1937, Laura Belle Harris in 1942, and Viola Harris Douglas in 1945) the women were buried with the rest of the Madill family in Bellefontaine.