Mrs Agnes Davies (or Davis1) was born as Agnes Friggens 2,3 in Ludgvan, Cornwall, England on 23 November 1861.

She was the daughter of Grace Friggens (b. circa 1841 in Gulvall, Cornwall) who was unmarried at the time of her birth4. Grace seemingly married a few years later to a man named Thomas Victor and had at least one more child before emigrating to the USA, leaving Agnes behind.

Agnes was apparently raised by Henry White (b. 1820) and Dinah White 5 (b. 1819), the latter née Rowe, natives of Ludgvan who already had a large family. Agnes first appears on the 1871 census living with them at an address in Lennor, Penzance. By the time of the 1881 census, Dinah (now a widow) and Agnes are the only ones present at their home on New Mill, Madron, Penzance and both are described as charwomen.

Agnes was married in Penzance on 31 May 1886 to Richard Henry Nicholls (b. 11 August 1867 in Ludgvan, son of Richard and Charity Nicholls), a mason who worked at the quarry at Trenowith Downs. The couple had three children: Mary Ethel (b. 1886), Richard Henry (1890-983) and Joseph Charles (b. 1892) and the family appeared on the 1891 census living at an unspecified address in Nancledra, Cornwall. When Agnes' husband Richard Nicholls died is not certain but she was listed as widow on the 1901 census when she and her children were living at Corbis Bay, Uny Lelant, Cornwall.

She was remarried in Penzance in early 1903 to Robert Davies (b. 1843 in St Ives, Cornwall), an insurance agent. The couple had their only child several months later on 31 July, John Morgan Davies. Sadly Agnes was widowed again when her husband died in 1910. Agnes, her son John and two sons from her first marriage appeared on the 1911 census living at the Stennack in St Ives.

Not long afterward her eldest son, Richard Nicholls and his wife, emigrated to Kearsarge near New Allouez, Houghton, Michigan. A short while later Agnes decided to take her family to join her son and daughter-in-law in America. To raise the necessary funds she sold all her belongings in St Ives. With this done their ticket (number 33112  which cost £36, 15s) was purchased from William Cogar who was the White Star agent in St Ives. The family left St Ives by train and travelled with a family friend, Maud Sincock of Halsetown. Agnes and her infant son, John Davies occupied a cabin with Maude Sincock and also Alice Phillips of Ilfracombe, Devon; her elder son Joseph had separate accommodation.

Agnes survived the sinking (probably in lifeboat 14) with her youngest child but her son Joseph was lost. The events immediately before and after the sinking were recounted by her to a Calumet newspaper on arrival in Michigan.

Agnes and her son John spent about 5 hours in the boat before being picked up by the Carpathia aboard which she commented that 'everything possible was done for the saved'.

On arrival in New York in addition to overnight accommodation, she was given a train ticket, $5 in cash and a lunch box by the White Star Line. She left New York by train heading for Mohawk, Michigan. Once in Michigan passengers on the train between Negaunee and Calumet recognising her need, raised 'a neat little sum for her benefit'. A subscription list was also started for her benefit in Calumet. The Calumet News also went on to say that Mrs Davies was a 'pleasant and refined woman but greatly overwrought and nervous as a result of her experience, suffering and bereavement. The sinking of the Titanic had taken from her, her almost sole support, a nineteen year old son. The loss of whom seems to her to have been unnecessary, too, which makes it all the harder to bear. '

The following appeared in the St Ives Times in early May 1912.

She later recounted her experiences on the Titanic at the Calumet Opera House.

Agnes remained in Hancock, Michigan for the rest of her life and was remarried in 1921 to Richard Edwards (b. 1881), a fireman of English birth. The couple lived at 949 Railroad Avenue in Hancock.

Agnes passed away in St Joseph's Hospital, Hancock, Houghton County, Michigan on 4 August 1933, aged 71 and she was buried on 7 August 1933 Lakeview Cemetery, Calumet, Houghton, Michigan. This cemetery also holds a memorial to her son Joseph Nicholls and the grave of her son, John Davies who died in 1951. 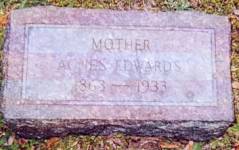