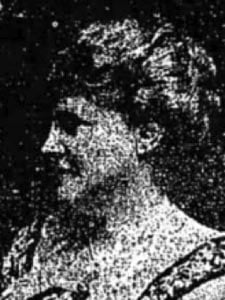 Following the death of her mother, Emma appears on the 1870 census living in Burlington, New Jersey. By this time her father had remarried to a Massachusetts-born woman named Susan (b. 1822).3

In 1871 she was married to William Robert Bucknell (b. 1 April 1811). Bucknell, who hailed from Delaware, Pennsylvania, was a committed Baptist, real estate dealer and agent, builder of gas and water works, owner of coal and iron mines, and was patron of Bucknell University. In 1882 Bucknell donated a large to the university when it was in financial difficulties and in 1886 the university changed its name from the University at Lewisburg to Bucknell University, in his honour.

Emma was widowed on 5 March 1890 and inherited a fortune from her late husband. She later built a summer retreat, Pine Point Lodge on Upper Saranac Lake, New York, and divided her time between living there and in Pennsylvania and also did a considerable amount of globetrotting. She is believed to have made frequent trips to her daughter Margaret, the Countess Pecorini, in Rome. She was shown returning to New York from one such trip aboard Kaiser Wilhelm II on 1 June 1910. By the time she returned from another trip on 28 June 1911, aboard Kronprinz Wilhelm, she was accompanied by her maid Albina Bassani, a Rome native.

In late 1911 she again travelled to visit her daughter, Countess Pecorini, and for her return to the USA and the home of her son Dr Howard Bucknell in Atlanta, Georgia, she boarded the Titanic at Cherbourg as first class passenger, together with Albina Bassani (ticket number 11813 which cost £76, 5s, 10d). She occupied cabin D15. While awaiting the Titanic on the tender at Cherbourg Mrs Bucknell told Margaret Brown, an old acquaintance, that she had "evil forebodings" that something might happen to the ship. Mrs Brown laughed but Mrs Bucknell would have cause to remind her of her words only days later.

On the night of the sinking Mrs Bucknell and her maid were rescued in lifeboat 8. In the lifeboat she helped row until her hands were blistered.

Following her rescue by Carpathia, she would later describe the scene of Bruce Ismay being confronted by other survivors:

"After being taken aboard the Carpathia, J.Bruce Ismay went to a cabin and remained closeted until waited upon by a committee of the survivors, who demanded that they be permitted to see him. One of the questions that was put to him was as to what the White Star and the International Mercantile Marine Co.'s intended doing in the way of reparation. To this Mr. Ismay replied that the company would do all in its power to make a partial repayment for the suffering of the survivors. Further than this he would say nothing."

The disaster did not deter Mrs Bucknell from further travel. On a passport dated 27 September 1912 she is described as standing at 5' 3¼" with a round face, hazel eyes and mixed-grey hair.

In later years Emma divided her time between her home Pine Point Lodge and her winters in Florida although it is not clear how long her maid Albina Bassani remained in her service. Emma appears on the 1920 census residing at her home in Clearwater, Florida. She died, following a long illness, at her home in Upper Saranac Lake, New York on 27 June 1927 aged 74 and was later buried in Erieville Cemetery, Nelson, New York where her parents were also laid to rest.