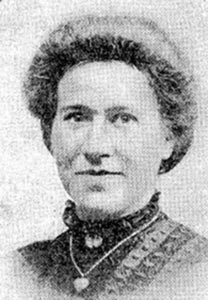 She had three known siblings: Emma (b. 1866-1928, later Mrs William Crundwell), William Henry (b. 1869) and Anna Elizabeth (b. 1875).
Florence, or Kate as she was better known, first appears on the 1881 census when she and her family were living at Eyhorn Street in Hollingbourne. The 1891 census shows the family living at an unspecified address in Bearsted, Kent.

Kate was married on 26 December 1899 in Thurnham, Kent to Percival Thorneycroft (b. 1875), an agricultural labourer and a native of Leeds, Kent. The couple would have one child, John Frederick (b. 1907) who died whilst he was still a small infant.

Percy and Kate appeared on the 1901 census living at Horsham (?) Road, Thurnham, Kent and on the 1911 census at Fancy Row, Thurnham. Living with them also at the time of the 1911 census was Florence's widowed mother Christina Stears.

Percy and his wife boarded the Titanic at Southampton as a third class passengers (joint ticket number 376564 which cost £16, 2s). Their last address was given as 14 Walter Street, Penge, London and they were headed to Clinton, New York. Travelling with them was Charles Robert Guest from their locale in Kent.

During the voyage Mrs Thorneycroft had been seasick and on the night of the sinking was unable to sleep. She felt a sudden jar and then noticed the cessation of the engines. Dressing and leaving her cabin with her husband, she was perhaps among the small groups of woman led up to the lifeboats by stewards. It is also likely she last saw her husband in the third class quarters before she was brought to the boat deck as she described how men started to follow the women (from the aft well deck?) but were ordered back "in harsh terms, being told that unless they went back they would be shot...." Mrs Thorneycroft did not realise it would be the last she saw of her husband and believed that the men would be cared for similarly at a later time. Upon reaching the boat deck she described being flung into a lifeboat and her experience in the boat was less than comfortable: due to leaks, water flowed in and many of the occupants were forced to stand. She was positioned so close to one of the crewmen that every time he rowed she was struck by the oar, leaving her bruised and sore.

Kate Thorneycroft was rescued from the sinking, possibly in lifeboat 10. Her husband (alongside Mr Guest) was lost in the disaster. When Kate arrived in New York she was met by family. She did not, however, settle in New York and left the USA altogether, arriving back in England on 5 July 1912 aboard Adriatic and she was reunited with her family there.

Kate was remarried at the beginning of 1913 to Albert Thomas White (b. 20 November 1886), a general labourer who was a second cousin and fellow native of Kent. The couple had no children and continued to live in Maidstone and were shown residing there on the 1939 British Register.

Kate frequently spoke of the events of the sinking and her arrival in New York but in later life was said to have suffered from dementia. Her family believe this arose because of the trauma of the sinking and the loss of her husband. She coined a phrase which is still used by members of the family today -- 'I firgit so' -- a phrase she used whenever she became confused.