Frederick Sheath, known as Fred, was born in Southampton, Hampshire, England on 27 February 1892 in Bell Street, All Saints.

Frederick first appears on the 1901 census when he and his family (minus his father who was likely at sea) were living at 12 Bell Street, All Saints, Southampton. At the same address by the time of the 1911 census, Frederick was by now described as an unmarried merchant seaman.

Frederick was educated at the nearby Council School, York Buildings, East Gate, Southampton. Upon leaving school he joined the training ship HMS Victory at Portsmouth Dockyard and underwent his Merchant Seaman training AND the age of eighteen he started his Merchant Navy career as a Trimmer. His first ship was the SS Dunottar Castle and he would later serve aboard Majestic, Oceanic and Olympic. 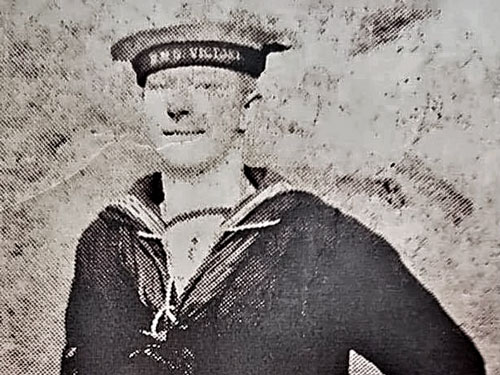 When he signed-on to the Titanic, on 6 April 1912, Frederick gave his address as 12 Bell Street (All Saints, Southampton). His last ship (according to the agreements) was the Kingsland 1. As a Trimmer, he could expect to earn monthly wages of £5, 10s.

On the night of the sinking Fred was in a stokehold when water started pouring in through a bulkhead. Fred, along with his mates, was sent to the boat deck. Arriving there Fred and a handful of other crewmen made up the dozen-total of people rescued in controversial Lifeboat 1 and, like the other crew in that boat, he would receive £5 from Sir Cosmo Duff-Gordon to compensate him for the loss of his kit.

When they were finally rescued by the Carpathia, Fred was given a blanket and a hot drink and sent below to rest. He later returned to Britain and was a witness at the British Enquiry, answering 32 questions. He later resumed his career at sea and served aboard various vessels through peacetime and throughout the first World War, including the ships Galeka and Avon.

Fred battled with severe asthma and he eventually had to leave the sea and he became a ''Docker'' in the Southampton Docks. Unfortunately his health continued to decline and he died on 18 March 1934 at the age of 42. He was buried at Southampton's Hollybrook Cemetery (section A11, plot 286). His widow later remarried, becoming Mrs Mabel Watts, and she died in Southampton in 1980.

Brian J. Ticehurst Frederick Sheath: Story of a Southampton Titanic Survivor
The story of a Titanic Survivor
(1912) Wreck Commissioners' Court, Proceedings before the Right Hon. Lord Mersey on a Formal Investigation Ordered by the Board of Trade into the Loss of the S.S. Titanic, Titanic Inquiry Project
Search archive British newspapers online