He was the son of Richard Henry Homer (1819-1902), a physician, and Elizabeth Mason Jackson (1829-1888). His father was English1 by birth, originating in Dudley in the West Midlands, whilst his mother hailed from Ohio and they had married in Kentucky on 25 January 1845, initially settling there in Grant County before relocating to Greensboro, Indiana in the mid-1860s.

Harry was married in Chicago on 9 March 1893 to Delia Atwater (b. 1875). Their marriage license was reported in the Chicago Tribune the following day on 10 March 1893 and it was stated that Harry was 21 and his bride 18. The couple had a daughter named Ruth in 1904 (later Mrs Donald Eugene Cross). Few facts are known about this marriage or how long it lasted. 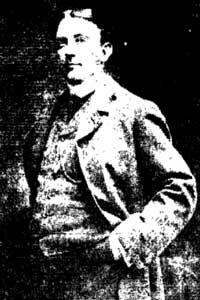 Having earned the nickname "Kid," Homer had a shadowy past with numerous run-ins with the law; below is a 1906 entry of some of his misdemeanours to date:

He moved around frequently, seemingly getting into trouble wherever he went and becoming wanted in several cities and states:

HOMER TO BE BANISHED
Detectives Littleton and Brewer yesterday forenoon arrested at the corner of Canal and Baronne Streets a notorious crook named Harry M. Homer, alias Delon, and charged him with being a dangerous and suspicious character. Homer was arrested in Buffalo, N.Y. in 1901 as a dangerous and suspicious character and was given twenty-four hours to leave that city. In the same year he was arrested in Cleveland, Ohio for grand larceny but beat the case and was discharged. In 1905 he was arrested in Cincinnati, Ohio and was fined 300 (? illegible). In 1906 he was pinched in Hot Springs, Arkansas as a confidence man and wire tapper. Homer will be brought before Recorder Fogarty on Monday.
(Unidentified newspaper, circa 1907)

His confidence trickster activities led to him being included in the US album of criminals in 1906; with a known alias of Harry Dillon, he was then described as aged 34, standing at 5' 9" and weighing 180lbs and of medium and stout build. He had blue eyes, sandy hair and a florid complexion. He had a mole above his left eyebrow and several tattoos.

In November 1908 he wound up in New Orleans, Louisiana which was, at the time, attempting to clean-up a gambling problem in the city. Homer's arrival piqued the interest of local law enforcement:

Detectives Mooney and Holyland yesterday afternoon arrested James L. Wright and Harry H. Homer, said to be well-known to the police, and locked them up in the First Precinct Police Station, where they were charged with being dangerous and suspicious characters. Very little money was found on either of the prisoners when searched, it is the supposition of the detectives that they had come to recuperate financially. Homer is said to have had his picture in the local rogue's gallery, and has been arrested in various cities in connection with wire-tapping, pocket-picking and other alleged crooked work. When seen last night, Wright said he was merely passing through New Orleans on his way to Cuba, and Homer emphatic in declaring that he had stopped off only a few hours while en route to San Antonio, Texas.
(The Times-Democrat, 24 November 1908)

Reportedly working for a Texas-based land company, following a trip to Europe and Egypt Homer joined the Titanic at Cherbourg as a first class passenger (ticket number 111426 which cost £26, 11s); probably due to his nefarious past and reputation he boarded the ship using the pseudonym "E. Haven". Although there are different tales as to the survival of Homer and his gambling associates aboard, such as bribing a crewman, etc, Homer is believed to have escaped in lifeboat 15.

SURVIVOR SEEKS REST BEFORE COMING HOME
Harry Homer, Titanic passenger, writes sister here that shock causes suffering.
Mrs Louise Logsdon, 35 the Eugenia flats, has received a letter from her brother, Harry Haven Homer, one of the survivors of the Titanic, saying that he is suffering from the nervous shock occasioned by the disaster, and that he intends taking a trip to San Antonio, Tex., for his health before returning to his home here.

The letter, which was very brief, gave nothing of the details of the wreck and of how he was saved, but merely stated that he was in the icy water for four hours.

The last time Mrs Logsdon heard from her brother before the accident was when he was in Cairo, Egypt several weeks ago, but she says that as soon as she heard of the wreck she felt he was in it. She told her friends and neighbours in the flat that she was sure that he was a passenger on the boat, and immediately began buying every newspaper she could find.

FINDS NAME ON LIST
At last she learned that his name was on the passenger list, but the accounts were so conflicting that she was not sure he survived until receiving his letter.

Mr Homer travels for a land company in Texas in which he is interested, and his duties carry him to all parts of the country as well as to Europe. The trip from which he has just returned was his fourth abroad in the last year.

He was born in Knightstown, Ind., and his father was Dr H. A. Homer, a well-known physician of Henry County. He and Mrs Logsdon were the younger children of the family and from childhood have been almost inseparable. His duties kept him on the road most of the time, but he always made Mrs Logsdon's home his headquarters and received his mail there. On his short visits here he made many friends and acquaintances.
(Indianapolis Star, 24 April 1912)

Homer's brush with death did not alter his ways and in 1914 he was arrested in Toledo, Ohio and sentenced to two years in the federal penitentiary in Atlanta; one of his accomplices was a familiar name:

SHEA AND ASSOCIATES
Are convicted at Toledo of having swindled two farmers
Toledo, Ohio, January 29.--Five men were convicted in the United States District Court here today of having defrauded two farmers by the use of a fake wire scheme. The following were sentenced:
Harry H. Homer, alias Bolder, alias Baldwin, of Indianapolis, two years at Moundsville, fined $2000 and costs.
George A. Brereton, alias Banning, of New York, same sentence.
Berta Hathaway, alias Manton, of Chicago, 21 months.
John C. Arthur, alias Hayes, of Dayton, sentence deferred.
John J. ("Mickey") Shea, of Toledo and New York, who has been mentioned prominently in the " clairvoyant trust," was given 35 days in jail on a contempt of Court decision. He will be given his sentence later.
The men were arrested on charges made by Wilbur Rundell, a farmer of Pontiac, Mich,, that he had lost money on an imaginary horse race.
(Cincinnati Enquirer, 30 January 1915)

With his sentence possibly reduced Homer was back at large when, in September 1915, he was arrested in San Francisco as being the mastermind of a wiretapping scheme:

Harry Homer and gang made $8000 by wire tapping
San Francisco, Sept. 30--Harry Homer, known over the world as a "swell" gambler, and who was supposed to have been lost on the steamer Titanic, is under arrest here today. Peter Mokovihs, a fruit dealer, caused his arrest, claiming that Homer was the guiding spirit of a wire tapping scheme.
According to Mokovihs, Homer and his gang permitted him to win $20,000 and then induced him to play until he had lost that and $8000 more. Homer's wife was also arrested. She is said to be the daughter of a banker in Toledo, O., and Homer is said to be wanted in Toledo and several cities in the east on charges of obtaining money by fraud.
(South Bend News-Times, 30 September 1915)

Later that same year, in November 1915, he was arrested in Chicago, although to crimes to which he was only possibly tenuously linked:

Harry Homer, said by the police to have a long criminal record, was taken into custody yesterday by detectives who told him he was suspected of planning to work a wiretapping game on Maj. B. Shaw Wood of the British army, who is at the Congress hotel seeking supplies in Chicago for his government. Homer was told that two other men--known as "English Jim" and Rothbart--were in the conspiracy with him. He denied knowing these men. He said he had bought a ticket for Cleveland when he read of the plot with which he was credited. The police are thinking of something to charge him with.
(Chicago Tribune, 12 November 1915)

Later part of a suspected gang operating in Mineral Wells, Texas and Tulsa, Oklahoma in 1919 Homer was going by the pseudonyms of Logsden (his sister's married name) and Brewster when he attempted to swindle a Missouri farmer and was again arrested.

Harry had been married for a second time in Manhattan on 17 April 1914 to Marie Maud Hanscom (b. 28 June 1883), a divorcee from Akron, Ohio, the daughter of a banker who also became embroiled in his appalling activities. It appears they lived in Cincinnati (and possibly Los Angeles) during the 1920s and 1930s, but this is unclear. Homer's continual movement and use of aliases mean that details of both his marriages remain largely unknown but there are some indications that his wife Marie died at a young age, possibly as early as 1920.

He continued to journey extensively, travelling on ships that included: Bremen, Britannic, Empress of France, Europa and Pennsylvania. In 1921 he applied for a US passport, intending to sail from a port in Florida as soon as possible. In 1923 he applied for another passport and indicated then that he had spent short periods living in Britain and Cuba; his intended destinations, for business and pleasure, were France, Belgium and England. He was described as standing at 5' 9" and with brown hair, blue eyes and a fair complexion. 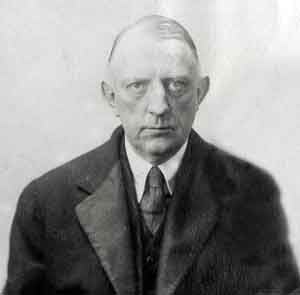 Even journeying into his advanced years Homer's travels around the USA continued to bring him into conflict with the authorities:

HOTEL GUESTS HELD BY POLICE
Two men arrested in the same downtown hotel yesterday are held by the police on suspicion that they are wanted in other cities as confidence men.
A middle-aged prosperous looking man who was known at the hotel as Charles W. Baker, an Australian, is believed by detectives to be J. B. Kinsman, wanted in Denver and Okmulgee, Okla. as a "high class bunk man" and for whom a $1000 reward.
Later detectives Frank McConnell and Charles Gallivan also arrested Harry H. Homer, who claimed to be an Indiana farmer, but who police say is wanted in Los Angeles and New York. He admitted having been arrested during the exposition in 1915 on a vagrancy charge and said he had once been a bookmaker but now devoted all his time to farming.
Each of the men had about $300 when arrested and both were unusually well dressed.
(San Francisco Examiner, 18 May 1926)

Harry resided for some time in Hamilton, Ohio but eventually died in Manhattan, New York on 10 February 1939. His estate was left to his brother Morris and wife Emma of Butler, Ohio.