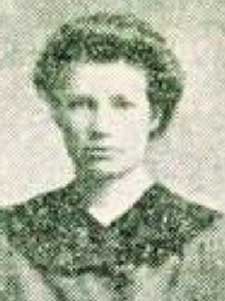 Mrs Alexander Hirvonen (Helga E. Lindqvist), 22, was born on January 2, 1890. She came from Dalsbruk (Taalintehdas), Kimito Island, in southwest Finland. Helga boarded the Titanic at Southampton. She was travelling to join her husband who,was a steel worker in Monessen, PA. She travelled with her daughter Hildur, brother Eino Lindqvist and August Abrahamsson.

In Southampton Helga wrote a card with picture of the Titanic to friends in Dalsbruk. There for a long time Helga was believed to be dead. Eino Lindqvist placed his sister and niece into a lifeboat, probably lifeboat 15.

Helga stepped off the Carpathia to be met by her husband. They settled in USA. From 1926 they lived in Syracuse, New York.

Helga Hirvonen died on 17 May 1961. She is buried at Union Hill Cemetery, Cato, New York.