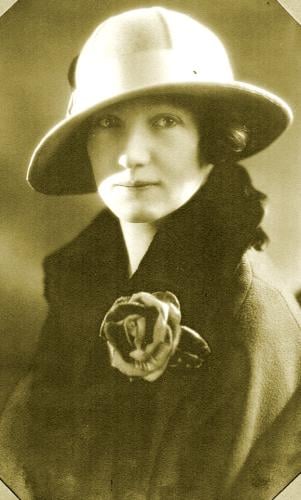 Kate Herman was born in Galhampton, Somerset, England on 6 December 1887 1.

She was the daughter of Samuel Herman (b. 1862), a butcher, and Jane Laver (b. 1861). Her father was born in Somerset whilst her mother was born in India to British parents. They were wed in early 1887 and Kate became one of only two children born to the couple. Her only sibling was her twin sister Alice.

Kate first appears on the 1891 census living with her family at 4 Abbey Cottages in Castle Cary, Somerset and would still be at this address by the time of the 1901 census. The family later moved to Smallways, Castle Cary. The 1911 census shows Kate working as a bar maid at the Junction Hotel at 42 Great Western Road in Dorchester, Dorset.

For several years her father was the proprietor of the Britannia Hotel in Castle Cary. Although a financially comfortable family, the past year had seen a slump in their fortunes in England and it was decided that they would emigrate. Originally booked aboard a different ship, they cancelled their voyage to allow more time to prepare. Kate, her parents and sister and her father's young employee and surrogate son George Sweet boarded the Titanic at Southampton as second class passengers (ticket number 220845 which cost £65) and were bound for her uncle Arthur Laver who was living in Bernardsville, New Jersey where he worked as a steward of the Somerset Hill Country Club.

On the night of the sinking Kate, her mother and sister were in bed when the collision occurred but reported not much of a shock. Her father, who had been on deck, returned to the cabin and told them not to fear and to stay in bed as it was bitterly cold. He went to investigate and soon returned, ordering his wife and daughters to dress and they headed to the boat deck where the ladies are believed to have departed in one of the aft boats.

Her father and George Sweet were lost in the sinking and their bodies, if recovered, were never identified.

In New York, she and her family were met by her uncle Arthur Laver and his associate William David Cleland. The party journeyed to the Somerset Hill Country Club in Bernardsville where they were interviewed by The Bernardsville News.

Kate soon found love in America and moved to Portland, Oregon where she was wed on 5 January 1914. Her suitor was Walter George Parsons (b. 25 November 1885), a dairy merchant originally from Surrey. The couple remained in Portland for the rest of their lives and went on to have three children: Hermione (1914-1997, later Mrs Maurice Kinney) and, coincidentally, twin sons: Norman Elliott (1917-2009) and Herman Albert (1917-2008). She became a naturalised US citizen on 26 February 1952

Her husband, who later worked as a chef, died 10 November 1950 and Kate went to live with her daughter and her family. In later life she was a member of the Titanic Historical Society.

Michael A. Findlay Voyage (2005) The Herman Family
Titanica! (2018) Twins on the Titanic
How many sets of twins were on the Titanic