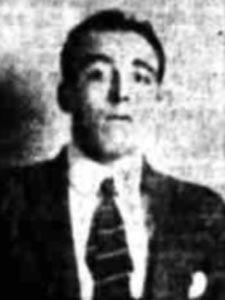 He was the son of an English-born father of Irish ancestry, John Charles Hyland (1864-1926) and an Irish-born mother, Catherine Bergin (1864-1923) who were married on 1 July 1889 in Our Lady of Reconciliation Church, Liverpool.

His father, a ship's baker and later a coal porters' foreman, hailed from Birkenhead, Cheshire whilst his mother was a native of Mountmellick, Queen's County (modern-day Co Laois) in the Irish midlands.

Leo and his family moved to Southampton not long after his birth and his brother Thomas was born in that city in 1895, followed by a sister Dora who died as an infant. When the family appeared on the 1911 census they were living at 34 Threefield Lane, St Mary, Southampton and Leo's father was still, at the time, described as a ship's baker and bread-maker. Leo seemingly went to sea when he came of suitable age and he would be absent from the family home when the 1911 census was conducted. His family were then listed as living at 55 Orchard Place, St Mary, Southampton. Both his brothers John and Thomas were still at home and were described as a railway clerk and telegraph messenger, respectively.

When he signed-on to the Titanic on 4 April 1912 Leo gave his address as 55 Orchard Place, St Marys, Southampton and as a third class steward he could expect monthly wages of £3, 15s. His previous ship had been the New York, the same ship that Titanic had a near-collision with in the Solent whilst departing Southampton.

Hyland was rescued in lifeboat 11 and would later make a sketch of the ship as he saw her sinking. 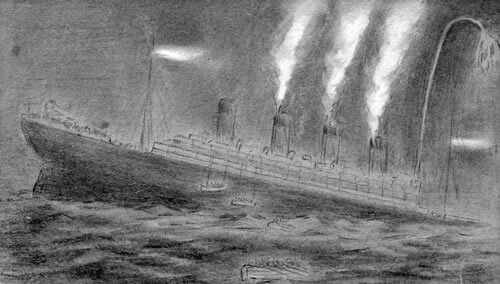 Hyland's sketch of the sinking

Leo later returned to England, not having been required to testify at either the American or British Inquiries into the sinking. He continued his work at sea.

Hyland was married in Southampton on 10 August 1923 to Maria Ludovica Delen (b. 12 October 1887). The couple remained childless and by the time of the 1939 register they were residents of 11 Chaplin Street, Southampton, Hyland being described as a chief linen keeper.

During the 1950s Hyland corresponded with Walter Lord during his research for A Night to Remember and he frequently gave interviews regarding the subject of Titanic to local media. In 1962, then a resident of Burlington Road, Southampton, he was interviewed by the Belfast Telegraph when he related that:

"The first intimation I had that the situation was serious," he said, " was the sight of canvas covers fully extended below decks to balloon shape... I recall the ship's final plunge amid a crescendo of bursting boilers, and the tragic diminishing conclusion--the poignant cries of the drowning."

Widowed in 1972, Leo continued to live in Southampton until his death on 14 June 1974 aged 81. He was cremated and his ashes scattered at Southampton crematorium memorial garden (section, bed A2).