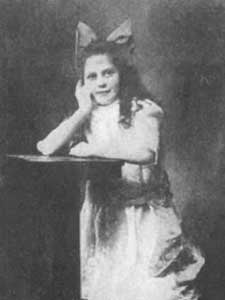 Miss Lillian Gertrud Asplund, 5, was born in Worcester, Massachusetts on 21 October 1906, the daughter of Carl & Selma Asplund. Lillian was a fraternal twin and her twin brother was Carl Edgar.

Lillian's family came originally from Alsema in the Smaland region of Sweden but had for some years been settled in Massachusetts. In 1907 they had returned to Sweden to settle Mr. Asplund's father’s estate upon his death and to care for his mother. In 1912, Lillian's father, Carl O. Asplund, was set to go back to his previous position as a labourer at Spencer Wire Works in Worcester. According to a letter written by Mr. Asplund to his sister, the family was very much looking forward to returning to the United States. Four of Lillian's aunts (3 being her mother's sisters and 1 her father's) and their families lived in Worcester at the time.

In an interview conducted with Miss. Asplund, some time ago, she recalled the disaster and relayed how she remembered being passed through what she described as a window (later identified as the First Class Promenade Deck) into a descending lifeboat and looking back up at the sinking Titanic. Having left 3 of her brothers, including her twin, Carl, and her father onboard the doomed ship, she maintains she was haunted by their faces peering over the rail at her for much of her life. She recalled her father was holding her twin and her 2 older brothers were on each side of them. Lillian was rescued with her mother and brother, Felix. After rescue by the Carpathia, they were brought to St.Vincent's Hospital in New York City.

Upon their eventual arrival in Worcester, they resided at 151 Vernon St., the families original intended destination, at the home of Lillian's aunt and uncle. The devastated family had lost all of their possessions including their life savings on the Titanic. The city of Worcester, shortly thereafter, held a very successful fundraiser and benefit for the family with the total sum raised reaching nearly $2,000. That money was supposedly invested and the interest paid to the family with access to funds as needed. The mayor of Worcester at the time, the honourable Mayor David F. O'Connell, was one of the trustees. In 1951, Lillian and her family moved to Shrewsbury, Massachusetts.

After the disaster, Lillian was employed at various secretarial jobs in Worcester but retired early to care for her elderly mother. Her mother passed away on the 52nd anniversary of the disaster that claimed the lives of 4 members of her family, at the age of 90. Her younger brother, Felix, passed away at the age of 73, 18 days shy of his 74th birthday. Neither Lillian or her brother ever married and never had children.

Lillian Gertrude Asplund was the last living survivor of the Titanic disaster with actual memories of it. She lived in Massachusetts until her death on 6th May 2006. Lillian's hobbies, when she was able, included gardening, flowers (especially roses) and it was said her favourite snack was pepperoni pizza. She declined ever to discuss the disaster, as had her mother.