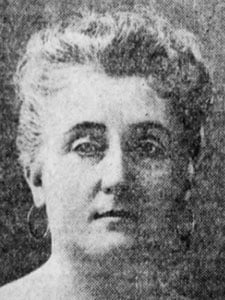 Mrs Robert Clifford Cornell (Malvina Helen Lamson), 55, was born on 10 December 1856. Her husband was a son of George J. and Caroline Cornelia Cornell.

Mrs Cornell was accompanied by her sisters Mrs Edward Dale Appleton and Mrs John Murray Brown. They were returning to America having attended a family funeral in England. During the voyage they were joined by Miss Edith Corse Evans who boarded at Cherbourg as well as Colonel Archibald Gracie who gallantly offered his services to the unaccompanied ladies.

Mrs Cornell was later rescued in lifeboat 2 with Mrs Appleton. They were eventually reunited with Mrs Brown on board the Carpathia and were surprised to meet their uncle and aunt Mr and Mrs Charles Marshall who were passengers on the vessel.