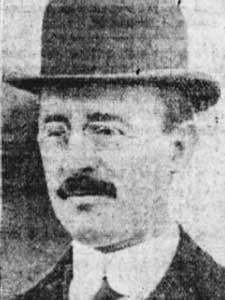 Björnstrom was the son of one of the pioneers of Swedish pulp industry. After finishing his studies in Stockholm's technical university he got a job in Rydö sulphite plant. Since 1909 he had been living in Washington as the holder of Swedish government scholarship. He is also recorded as being a Swedish military attaché in Washington however in an interview he said: "...I should wish that you strongly would deny the rumors spread in the American newspapers that I am an attache at the Washington embassy."

He boarded the Titanic at Southampton as a first class passenger (ticket number 110564, £26 11s). It is possible that he shared cabin C-52 with Hugh Woolner.

Just prior to the collision Björnström-Steffansson had been drinking a hot lemonade in the first class smoking room with other gentlemen, there was a slight jar but he barely noticed and returned to his drink while others went off to investigate. He knew nothing of the danger until an officer came in and ordered pasengers to get their lifebelts and report on the boat deck.

While Björnström-Steffansson was on deck he joined fellow first class passenger Hugh Woolner to assist women, among them Mrs Edward Candee, into Lifeboat 6. Mrs Candee was supposed to be the responsibility of Colonol Archibald Gracie but, with at least four other unaccompanied ladies in his charge, he was nowhere to be seen.

Later, Woolner and Björnström-Steffansson heard pistol shots. They were fired by Purser Herbert McElroy to prevent a rush on Collapsible D which had just been fitted into the davits previously occupied by Lifeboat 1. The men rushed over and helped the officer pull men out of the boat and loading soon resumed.

By 2.00 a.m. the two men found themselves alone near the open forward end of A-Deck, just above them boat D was slowly descending towards the sea, as the water rushed up the deck towards them they got onto the railing and leapt into the boat, Björnström-Steffansson landed in a heap at the bow. Woolner's landing was similarly undignified but they were safe.

Whilst returning to New York on the Carpathia, Björnström-Steffansson and some other survivors (Frederic K. Seward - Chairman, Karl H. Behr, Molly Brown, George Harder, Frederic Oakley Spedden and Isaac Frauenthal) formed a committee to honour the bravery of Captain Rostron and his crew. They would present the Captain with an inscribed silver cup and medals to each of the 320 crew members.

He married Miss Mary Pinchot Eno in 1917. Accoding to his obituary he had been introduced to Miss Eno by Helen Churchill Candee of Washington, a fellow survivor of the disaster. Mrs Steffanson died in 1953. They had no children.

Håkan retired in the 1930s; He died May 21, 1962 leaving a fortune from pulp and land investments. His home on 57th street was then one of the few private houses left on Manhattan. Besides the sister listed in his obituary (Mrs J. H. Douglas Webster of London), he also left a nephew, Thord B. Steffanson, who had settled first in Michigan and later moved permanently to New York City and was a beneficiary of much of his uncle's wealth. Thord Steffanson died in New York City in January of 1977 at the age of 68.