Nelle spent her very early childhood in Wisconsin before resettling with her family around 1890 in Minneapolis, Minnesota where she appeared on the 1900 and 1910 censuses. 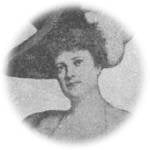 She was married on 22 January 1912 to John Pillsbury Snyder (b. 1888), a Minneapolis native. They left for Europe where they honeymooned, spending time in Gibraltar and Italy, the latter destination being spent arranging a dealership of Fiat cars for her husband's business.

For their return to the USA the couple boarded the Titanic at Southampton (ticket number 21228 which cost £82, 5s, 4d). They occupied cabin B45 and whilst aboard they became acquainted with other Minnesotan passengers; Mr and Mrs Walter Donald Douglas, Mr and Mrs William Baird Silvey, and Miss Constance Willard.

On the night of the sinking the Snyders had retired around 11.30 and were in their stateroom when the ship collided with the iceberg but explained: “There was not a great crash, not even a heavy jar when the ship struck the iceberg.” They both left their cabin to investigate and saw other bewildered passengers milling around. They asked a passing steward if they had struck anything and the man nonchalantly replied that they had just "grazed an iceberg" but that there was no danger and they were better going back to bed. Soon though they heard a man knock the door of an adjacent cabin; he had just come down from the decks above and reported to his friend that something serious may have happened. John and Nelle there and then decided to get dressed and go up top; when they got there a member of the crew was addressing the gathered passengers, advising them to return and fetch their lifebelts. The Snyders did as instructed and soon rejoined other passengers on the boat deck where they saw the crew swinging out the lifeboats.

When the crew called out for people to enter the first lifeboat being filled (number 7), the Snyders reported that a large number of the crowd seemed reluctant and stepped back. John and Nelle were assisted into the boat which was the first launched, the Snyders describing the launch as leisurely and without any confusion or commotion. They reported that the boat pulled away for about 200 yards before resting and was soon tied up to other boats during the night and also claimed to see, off in the distance, the iceberg that the ship had struck. Still not fathoming any real danger, from their vantage point in the boat they saw rows of portholes gradually disappear and that was when the urgency of the situation dawned on them. Her husband later reported that the ship broke in two following several explosions.

Aboard the Carpathia the Snyders met the other Minnesotan survivors, Mrs Mahala Douglas, Mrs Alice Silvey and Miss Constance Willard.

Nelle and John settled in Minneapolis and had three children: John Pillsbury (1913-1989), Thomas Stevenson (1915-1976) and Susan (1918-1984, later Mrs Rowley Miller). She and her family are shown on the 1920 through 1940 census records living at 2118 Blaisdell Avenue, Minneapolis. Her husband operated the Snyder Garage Inc. in Minneapolis up until his retirement in 1955 when they resettled in Wayzata, Minnesota.

The couple continued to travel and one such excursion to Europe in 1938 saw them in Austria when Nazi troops marched into Vienna and the Anschluss was declared. The family retreated back to the USA aboard the Queen Mary, arriving in New York on 4 April 1938.

Nelle, who was widowed in 1959, was active in her community in many philanthropic organisations and was a charter member of the Northwestern Hospital Board. In later years she became a member of the Titanic Historical Society and attended a convention in the 1970s. She continued to live at her home in Wayzata, Minnesota, lastly at 520 Indian Mound Street, and died there on 9 December 1983 aged 94. She was buried with her husband in Lakewood Cemetery, Minneapolis.

Dennis Foley (1976) 1976 letter from Mrs. Snyder about her experience on Titanic