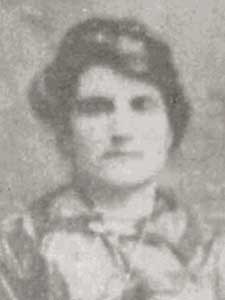 Her husband emigrated to the USA in 1908 and operated a grocery store in Houtzdale, Clearfield, Pennsylvania. He had asked his friend Antūn Mūsà Yazbak, who was returning to Lebanon to marry, to escort his wife and sons with him and his new bride. Antūn's new bride was none other than Aminah's younger sister Sīlānah (b. 1896).

Amīnah set out with her sons, her newlywed sister and brother-in-law and several other from Hardīn, bound for Beirut where they would travel to Marseille and then on to Cherbourg where, on 10 April 1912, they boarded the Titanic as third class passengers (joint ticket number 2661 which cost £15, 4s, 11d). Among the various relatives travelling with her was her cousin Thamīn Tannūs and her son As'ad.

On the night of the sinking Amīnah and her sons met up with Antūn and Sīlānah Yazbak who assisted her in handling her two boys whilst the party made their way to the upper decks. Whilst stories differ as to how the family escaped, it is generally believed that the women and children escaped in collapsible lifeboat C. Antūn Yazbak was lost in the sinking.

Upon their rescue by the Carpathia and eventual arrival in New York, Amīnah and her sons were treated for shock and exposure. Coupled with that her boys had contracted measles. Following recuperation the party made their way to Pennsylvania to be reunited with family and friends.

Amīnah became known as Minnie in America and she settled with her husband and sons in Clearfield, Pennsylvania where her husband Jirjis (now George) operated a dry goods store. The couple would have a further two sons: Roy (1916-1990) and Daniel (1918-1986) (the 1920 census shows another two children, James b. 1917 and a daughter named Arael, b. 1919; what became of these two children is unknown).

The family appear on the 1920 census together, still living in Clearfield. Unfortunately Amīnah became ill with tuberculosis in the early 1920s and, perhaps hoping that the Lebanese climate would be more suitable for her condition, she returned to her homeland to her family in Hardīn and never saw her husband and children again. She died around 1922.

Her widower George later moved himself and his children to Wilkes-Barre, Pennsylvania where he had family to help raise his children. He died in 1953.

Leila Salloum Elias (2011) The Dream and Then the Nightmare: The Syrians who Boarded the Titanic, the Story of the Arabic-speaking Passengers. Atlas, ISBN 978-9933-9086-1-4
Search archive British and Irish newspapers online