Miss Roberta Elizabeth Mary Maioni,1 known as Cissy to friends and family, was born in Norwich, Norfolk, England on 21 December 1891.2

She was the daughter of Louis Maioni (1857-1941), a hotel waiter, Jane Adelaide Rowland (1863-1941). Her mother hailed from Acle, Norfolk whilst her father was born in Cortina d'Ampezzo, Italy which was, at the time, part of the Austro-Hungarian Empire.3

In the months prior to Roberta's birth her parents and elder brother were listed on the 1891 census living at 86 Magpie Road, St Paul, Norwich. By the time of the 1901 census the family home was on Wallerton(?) Road in Paddington, London. The family would be living at Manor Farm in Windlesham, Surrey by the time of the 1911 census but Roberta was recorded elsewhere as a domestic maid to Royal Navy Commander Edward Harvey and his family at 50 Thurloe Square, Kensington, London. When she came into the employment of Lucy Noëlle Martha Dyer-Edwardes, Countess of Rothes, is not clear.

She boarded the Titanic at Southampton travelling as maid to the Countess of Rothes (ticket number 110152 which cost £86, 10s); also travelling with them was the Countess' cousin Gladys Cherry and whilst aboard she was allocated cabin B79. She later recounted that as the Titanic was departing Southampton she almost collided with another vessel, the New York. Many took this as a bad omen and Roberta also recalled how a large flock of seagulls followed the ship out to sea, this being, she was told, another bad omen. She had no time for superstitions however and instead busied herself caring for her employer and exploring the ship and making new acquaintances.

Family state that Roberta and a young crewman became fond of each other during the voyage but his identity is not known; he gave her a "Titanic" badge or brooch, which she always kept with her in later life.

Another acquaintance she made was of an older man whom she did not name and who had taken a paternal interest in her. The man, travelling alone, appeared to be lonely and on the evening of Sunday 14 April, she met him again in the lounge where the orchestra were playing tunes such as Ave Maria and Nearer my God to Thee. He was full of foreboding which made Roberta uncomfortable; at around 10 o'clock she tried to excuse herself for bed but he pleaded with her to stay. She eventually managed to get to bed and never saw the man again.

Roberta was in bed at the time of the collision and related how she felt the impact. A steward soon appeared at her door, telling her 'Miss we have struck an iceberg, but I don't think there's any danger. Should there be I'll come back and let you know.' She returned to bed to try to get back to sleep but the same steward returned, asking her not to be afraid but to dress and put on her lifejacket and go out on deck.

Roberta was rescued in lifeboat 8 alongside her employer the Countess of Rothes and Gladys Cherry.

After their arrival in New York on board the Carpathia the party stayed at the Plaza Hotel on Fifth Avenue. Whilst there Roberta wrote a poem all about her experience of the sinking.

Meanwhile, news of the tragedy slowly filtered through to Roberta's family at Manor Farm in Surrey. Her sisters were walking to the village when they were told the news and when they raced home and told their mother Adelaide the news, she fainted. It was reportedly three weeks before Roberta's mother knew that her daughter was safe. Roberta's surname had been spelled incorrectly on the passenger lists as "Miss Maloney". Eventually the White Star Line confirmed she was one of the survivors.

When Roberta was reunited with her family, her once beautiful hair was reportedly in tatters, much of it torn and pulled as she caught it while taking her turn rowing the lifeboat. In 1926 Roberta wrote a personal account of her experience on the Titanic for a short story competition run by the Daily Express.

She was married in St Matthew's Church, Brixton, London on 24 May 1919 to Cunliffe Lawrance Bolling (b. 26 December 1898) of Wimbledon, Surrey. Bolling, was the son of Richard Bolling and Annie Amelia, née Lawrence, the latter of who's father was a confectioner. Cunliffe later worked as a business consultant and had his office at 7 Park Lane, west London; during the 1930s he and Roberta lived at 15 Michelham Gardens in the affluent Strawberry Hill area of Twickenham; they had no children. Roberta's account, the badge given to her by the steward, and the poem which she wrote in New York, were auctioned in Devizes, Wiltshire in February 1999. 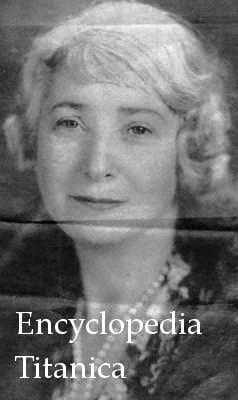 Roberta was widowed on 23 April 1938 and in later years she suffered from severe arthritis which she attributed to her exposure to the cold on the night of the sinking. She spent her final days in The Limes nursing home in Ditchling, Sussex and she died there on 17 January 1963 aged 71. Roberta was cremated at the Downs Crematorium, Brighton, Sussex4 on 22 January 1963, her ashes were scattered in the garden of remembrance at the crematorium.

Roberta's last surviving sibling was her sister Nina Gordon; she died in Christchurch, New Zealand on 1 April 1991 aged 94. Her brother Louis later served during WWI with the Canadian Engineers and he was killed on 29 September 1918.