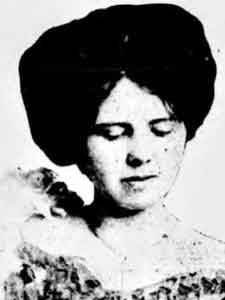 Miss Rosalie Bidois was born in St Helier, Jersey in the Channel Islands on 10 May 1865.1

She was the daughter of Pierre François Bidois 2 (b. 1835), a coppersmith, and Rosalie Martillet (b. 1839), a seamstress, a French couple who had married around 1860; her father hailed from Bellefontaine.

She appears on the 1871 census with her family at 7 New Street, St Helier but her parents were to die within a few years of each other, her mother in 1874 and her father four years later. By the time of the following census in 1881 Rosalie is not listed and her three brothers Pierre, Alfred and Jules are shown as inmates at the Jersey Industrial School for Boys in St Martin's whilst her sister Augustine is living with cousins at 23 Le Geyt Street, St Helier.

When Rosalie appears on the 1891 census she is living in London and working as a governess to the wealthy Dennison family at 13 Berkeley Square, Hanover, stating her birthplace as Paris. She drops off the radar after this but it is understood she had resettled in the USA sometime around the turn of the century.

Miss Bidois reappears when she entered New York aboard the Chicago in late September 1909; described as lady's maid she stated her ethnicity as French, previous residence as Paris and her point of contact as her brother Alfred of 9 Rosemount Cottages in Jersey. She re-entered the USA on 31 May 1911 aboard Majestic, again described as an unmarried lady's maid and standing at 5' 4", with a fair complexion, black hair and grey eyes. She stated her nearest relative as a friend living at 4 Rosemount Cottages in St Helier and her point of contact in the USA as her sister Augustine who lived at 9 High Street in Bar Harbor, Maine. Augustine had perhaps come to the USA around the same as Rosalie and also worked for several wealthy families; she died on 27 April 1926.

When Miss Bidois came into the employ of the wealthy second Mrs Astor is unknown; she accompanied her young mistress and her husband Colonel John Jacob Astor on their honeymoon to Europe and was one of three servants travelling in the party, the others being Mr Astor's manservant Victor Robins and Caroline Endres, a nurse charged with looking after the pregnant Mrs Astor's wellbeing. The entire party boarded Titanic at Cherbourg as first class passengers (ticket number 17757 which cost £247, 10s, 6d);

Miss Bidois accompanied Mrs Astor and Caroline Endres in lifeboat 4 and was saved; Mr Astor and Victor Robins were among the lost.

Little mention of Miss Bidois' time during the rescue has surfaced but she was mentioned in the New York Times (22 April 1912):

Mrs. John Jacob Astor and her maid, Rosalie Bidois, who were saved in the disaster to the Titanic, have been able to give to members of the Astor household some account as to what took place in the lifeboat which carried them away from the wrecked steamship...

In the work of rescue Mrs. Astor's maid played a conspicuous part. Six men believed to be seamen were dragged by the women into the boat. One of the men was dead when they found him, and another died shortly after he was pulled into the boat...

Mrs. Astor, from the time she entered the lifeboat until the long interval which followed before she and her companions were picked up by the Carpathia, displayed the greatest courage and fortitude. After being taken aboard the rescue ship she experienced a nervous collapse...

Upon landing in New York she gave her next of kin as an aunt Rosalie in Normandy.

It is not known for how long Miss Bidois remained in the service of Mrs Astor; Mrs Astor was remarried in 1916 and Rosalie does not appear with her on the 1920 census. By the time of the 1925 census she was still living and working in New York and is believed to have made at least one more transatlantic voyage during that time. She petitioned for US citizenship in that city on 4 May 1927 and became naturalised that December.

Rosalie was again shown arriving in the USA on 26 January 1932, sailing from La Havre aboard Lafayette; her US address was stated as 215 East 55th Street, New York. Only a matter of days later 6 February 1932 she was wedded in Manhattan to widower François Courtinade (b. 6 April 1874).

Courtinade, a Frenchman, had spent years in London working as a waiter before he came to the USA and married in 1914 to Louise Masbatin (b. 1880); the couple had no known children and Louise died in 1928.

The marriage between Rosalie and her new husband lasted less than a year and fell apart reportedly because of his adultery; they later separated but it is not certain if they ever actually divorced.

Rosalie suffered ill health in her later years and died in poverty in a Manhattan hospital on 24 September 1938 at the age of 73; she was later buried in St Raymond's Cemetery with her sister Augustine.

François Courtinade later remarried and worked as a pastry chef and cigar maker and was living in Manhattan by the time of the 1940 census. He died in Chicago on 26 October 1956 and is buried in Holy Sepulchre Cemetery in Worth, Illinois.