She was married in the early months of 1912 to Antūn Mūsà Yazbak, a native of her village who had emigrated around 1907 to Wilkes-Barre, Pennsylvania and who operated a shoe-making business with his brothers in Plymouth, Pennsylvania. Antūn left Pennsylvania in December 1911 and returned to Lebanon to wed; he had been asked by a friend in Wilkes-Barre, Jirjis Mubārik, to bring his wife and two sons across with him. Mubārik's wife was Amīnah Iskandar Nāsīf Abī Dāghir who was the elder sister of Sīlānah. Sīlānah's parents were also residents of Wilkes-Barre, living on Loomis Street in that city since the mid-1910s. She and her husband, along with her sister Amīnah Mubārik and nephews Jirjis and Halīm, including an assortment of other friends and relatives from Hardīn (including Thamīn Tannūs and her son) boarded the Titanic at Cherbourg as third class passengers (ticket number 2659 which cost £14, 9s, 1d).
Mrs Yazbak survived the sinking, but in which boat she escaped is not clear.

Arriving in Wilke-Barre in early May, Mrs Yazbak was interviewed by the Times Leader in that city; she recalled making it to the upper decks with her sister and the two children but made no mention of her husband. With a large crowd gathered near the lifeboats Mrs Yazbak was anxious that she and her family would not get a place. She became separated from her sister and ended up leaving the ship with her two nephews in a lifeboat she described as being filled with twenty women and five crewmen. During the night she and her nephews were transferred to another boat.

Mrs Yazbak recalled watching the ship sink and noticing how the lights disappeared rows at a time; when the ship finally plunged she reported several loud explosions.

Aboard the Carpathia Mrs Yazbak was overjoyed to be reunited with her sister but it was also then that she realised her husband had been lost.
Upon reaching New York Mrs Yazbak was greeted by her father who had hastened to that city to see his two daughters. Her two nephews had fallen ill with measles and were detained in hospital with Sīlānah and her sister remaining with them for the rest of the month.

The Evening News (Wilkes-Barre) reported on 28 May 1912 that Mr Yazbak's will, made before their marriage, made no provision for Sīlānah and that a court case was to ensue to see her rightful share fulfilled.

Sīlānah, who was noted for her beauty, later anglicised her name to Celiney Alexander Yasbeck. Still legally a minor and, perhaps with her own family unable to support her financially, Celiney was appointed a guardian by Judge Freas of the Orphans Court, as reported in The Evening News (15 June 1912), one Anthony Shiner, a Wilkes-Barre merchant and possibly also a relative.

On 20 January 1914 she was remarried to an old acquaintance Elias Michael Decker (b. 15 July 1890), also a native of Hardīn and son of Mike Decker and Rose Johns. He had emigrated in 1908 and had also set up home in Wilkes-Barre.

The family were shown on the 1920 through to 1940 census records as residents of 1058 West 42nd Street in Norfolk, where they lived for many years. Elias Decker, initially working for an ice company, later ran a filling station. He died on 13 December 1949 and was buried in St Mary's Catholic Cemetery in Norfolk.

As interest in the Titanic grew in the 1940s and 1950s Celiney became sought after by local media about her experiences; during the 1950s she corresponded with Walter Lord when he was writing A Night to Remember and was credited in the book. Around the beginning of that decade Celiney had also became aware that she had been living within blocks of another Titanic survivor for many years, Leah Aks.

Celiney, a devout Catholic, was a member of the Blessed Sacrament Catholic Church and also kept alive her Levantine traditions, especially in her cuisine.

In her last years Celiney was afflicted with poor health and developed diabetes. Following a heart attack she died at the DePaul Hospital in Norfolk on 10 March 1966 and was buried with her second husband in St Mary's Catholic Cemetery in that city. Her sister Emeline (Mrs William Decker) died in Wilkes-Barre on 23 April 1996 aged 99 and at the time her brother Zouk was still living in Lebanon. 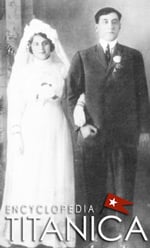 Monroe Journal (30 April 1912) A WIDOW 14 YEARS OLD
Young Syrian Girl's Husband Went Down With Titanic
(28 May 1912) WILL OF TITANIC VICTIM IS FILED IN COUNTY COURT
Bride of Few Weeks is Forgotten But Will Seek Her Share
Virginia Pilot (11 March 1966) MRS. CELINEY DECKER, 69, SURVIVOR OF LINER 'TITANIC'