He was the son of John Lindsay (1853-1901), a seaman, and Mary Tanner (1858-1935). His father was born in Antigua to English parents and his mother was a native of Bristol; they had married in Bristol in 1878. The family first settled in Bristol then moved to Dorset around 1888 before settling in Southampton sometime before the turn of the century where they ran a boarding house at 30 Chantry Road.

In the months prior to Charles' birth his family were living at 10 St John's Road, Bedminster. He first appears on the 1891 census when he and his family were residing in Kinson, Dorset at Granville Road and his father was by now described as a Line Foreman for the Western Counties Telephone Company. Charles was listed as a Lance Corporal in the Royal Engineers Mounted and Imperial Yeomanry at the time of the 1901 census and he was stationed at Aldershot, Hampshire. His father had died just months prior to this census and his widowed mother and siblings were by now living at 30 Chantry Road which they would eventually turn into a boarding house.

Lindsay had signed up for service in the Royal Engineers in Southampton on 29 August 1900, his previous calling given as wireman, perhaps in the assistance of his father. At the time he stood at 5' 4½", weighed 136 lbs and had black hair, grey-green eyes and had a fresh complexion. Sporting at least one tattoo, he came from a Church of England background and went on to serve as a driver and Lance Corporal and saw combat in South Africa during the Boer War until 1902 after which he joined the Merchant Service, seemingly around 1902/1903. 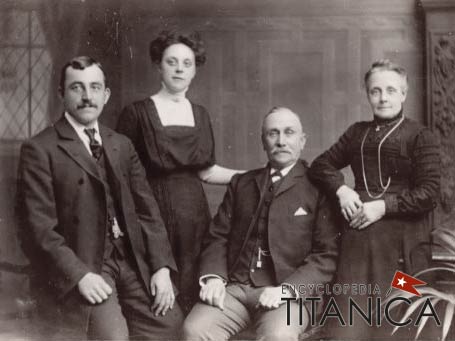 Family Group c.1912: Charles, his wife Harriett, and his parents

He joined the Union Castle Line on 24 September 1910 and served on the Edinburgh Castle as a fireman on "Cape Mail" voyages to South Africa.

When he signed-on to the Titanic, on 6 April, 1912 Charles gave his local address as 3 Coleman Street, (Southampton). His last ship had been the Briton and he had also served aboard Olympic. As a fireman he received monthly wages of £6. He was apparently acquainted with the Clench brothers (Frederick and George) and Charles Newman who were also serving aboard the Titanic.

Charles recounted shortly after the disaster that he was standing at the first funnel of the Titanic when the ship plunged and he was washed off, finding refuge atop upturned collapsible B. Surviving fireman Walter Hurst related in a televised 1956 interview that his mate Charles Lindsay offered him a hipflask. Believing it to be whisky or brandy, Walter took a mouthful but nearly choked when it turned out to be peppermint essence.

Following the disaster, Charles was reportedly deeply upset by his experiences and he returned to England aboard the Lapland. He was later discharged from the Royal Engineers on 28 August 1912.

Charles' wife had been pregnant at the time and gave birth to a daughter, Mabel Gladys on 20 October 1912. Another child, a son named William Alfred was born in 1914.

During the first world war he joined the Royal Navy as a Greaser, serving in several ships between 1915 and 1917 including HMS Morea.  He supposdly survived a second shipwreck when the ship he was serving on was torpedoed.1  He suffered loss of hearing as a result.

Charles and his wife lost their son William in 1926 and he became a widower in 1944. In 1958 Charles was one of a handful of survivors to attend a special screening of A Night to Remember at the Odeon, Leicester, Square, London. 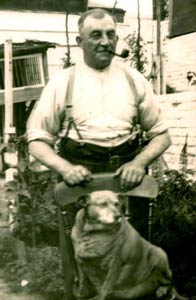 Charles Lindsay spent the last years of his life living at 159 Manor Farm Road, Bitterne Park, Southampton. He passed away on 19 November 1960 aged 79.

His daughter Mabel was married in 1937 to Frederick Chivers and they had one daughter, Sylvia, in 1943. Mabel died in Southampton on 4 January 1990.