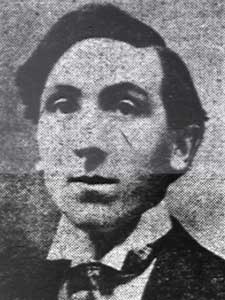 He was the son of Patrick Moran (b. circa 1837), a labourer, boatman and former lighthouse keeper on Ireland’s west coast for several years, and Bridget Nestor (b. circa 1845) who had married in 1867.

His mother died on 20 July 1891 from tuberculosis and his widowed father never remarried. Daniel appeared on the 1901 census living with his father and numerous siblings at house 8 in Toomdeely North and he was described as an unmarried domestic boatman.

Later that year Daniel departed Irish shores and arrived in New York aboard the Etruria on 2 June 1901, destined to the home of a sister in Troy, Rensselaer, New York. Other siblings followed, including Thomas and Bridget. On the 1910 census he was residing with maternal uncle John Nestor and his family at Ogden Avenue in Bronx, New York and he was described as a city policeman. A popular young man on the force and with an excellent record, by 1912 he had been with them for three years.

Daniel's father died in on 8 October 1909 aged 72 and his sister Bridget ("Bertha") returned to Ireland to settle his estate, estimated at between $15,000 and $30,000 (depending on the article). Daniel, whose last post was at Alexander Avenue Police Station, would also be making the journey to fetch his sister and carry their part of the inheritance back to the USA. His station captain later described Moran as:

“one of the finest young men he had ever seen, either in uniform or out of it, and that he had been heartily glad when hearing of his inheritance last autumn.” - Syracuse Journal, 4 May 1912

This doesn’t marry well with another story told a few weeks later in The News (16 May 1912) in which Moran walked into his superiors at his station house, handing in his shield and stating “I quit!” When asked why Moran reportedly explained:

“Because a man can’t keep his self-respect and be a policeman in the city of New York. We get abuse from all sides. We get some of it from our superior officers and some of it from citizens we meet on post. And the rules of the department prevent us from resenting an insult.”

Whether such an exchange ever took place is unknown.

Moran arrived back home in Ireland in November 1911 and spent the next few months there with friends and relatives. For their return to New York Daniel and Bridget boarded the Titanic at Queenstown on 11 April 1912 as third-class passengers (joint ticket number 371110 which cost £24, 3s).

Despite being financially comfortable enough to purchase second class accommodation, sister Bridget later revealed that they planned to travel as frugally as possibly in order to preserve as much as their new-found wealth as possible.

Travelling on their ticket was a friend, Patrick Ryan and they were also acquainted with another passenger from Askeaton, Margaret Madigan. Whilst aboard Daniel carried on his person his and his siblings’ inheritance, mainly in the form of banknotes.

Daniel Moran died in the sinking and his body, if recovered, was never identified. The inheritance that he went to Ireland to claim was also lost. His sister was among the survivors, but she gave conflicting versions of events concerning Daniel.

In one version Bridget claimed that on the night of the sinking she had been awakened by a jolt and was further roused by a commotion outside her cabin. Daniel soon arrived telling her that the ship had struck an iceberg and was in trouble and that she had no time to dress. Throwing a coat over her nightclothes, she made her way with the rest of her party to the communal areas but found difficulties getting near the lifeboats and she related how crewmen barred their access to higher decks. With a 'women and children first' rule being applied with access to even the vicinity of the lifeboats, Bridget’s brother and Patrick Ryan were prevented from going to A-deck, from where the aft starboard lifeboats were being loaded, and instead they had to bid their farewells somewhere in the third class areas of the ship, perhaps the aft well-deck. Brother and sister said their farewells and Daniel asked Bridget not to fear for him. Bertha was then taken to the upper decks where she entered lifeboat 15 and was saved.

In another version (perhaps because of embellishment by reporters), Bridget gave a much more fantastical version of events than she would in interviews conducted only days later by different newspapers. In said interview, printed in the Knickerbocker Press on 22 April 1912, she said that she and her brother had been on deck at the time of the collision, with frantic crew snatching lifebelts from passengers and hundreds of passengers not being able to find any lifebelts at all. Of course, instead of stepping into a lifeboat she was grabbed by the waist and thrown in and shortly afterwards saw her brother raise his hands above his head and dramatically dive off the ship to his death. In a third version she said:

“I would have drowned on the Titanic, too, had it not been for Dan. The ship’s officers and crew ordered that all third class passengers keep back. Dan fought his way through them, carrying me with him. He had a furious fight before he got me into a lifeboat. Then he took his place among the men on the deck. That was the last I saw of him. We had expected to have four thousand dollars apiece. Now the money is all gone and the worst of it, Dan’s gone, too.” - The Evening News, 16 May 1912

Daniel’s family were prostrated over his loss, especially since he was the mainstay of income for three of his sisters in New York. A claim was later made for the loss of his life (see Ryan v. OSNC research article).

His sister Bridget later married and named her firstborn Daniel James, in honour of his lost uncle.

The Chronicle Herald, 6 May 1912: Went Down on Titanic, Money With Him
The Knickerbocker Press, 22 April 1912, Titanic Survivors Reach Their Homes
The Knickerbocker Press, 22 April 1912, [Photo of Daniel Moran]
Schenectady Gazette, 24 April 1912, Troy Woman says Her Lifeboat Carried 82
Syracuse Journal, 4 May 1912, Went Down with Titanic Carrying Fortune Claimed
The Evening News, 16 May 1912, Ex-Policeman Fought Heroically to put His Sister on Lifeboat, Then Sank with Fortune
Search archive British and Irish newspapers online