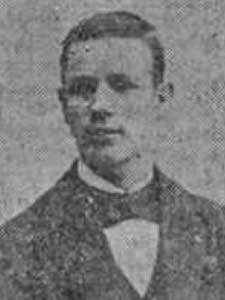 The family moved from Tannåker to Hörset, Berga parish, Jönköpings County before the close of the 1890s and Ernst worked there as a labourer. He was unmarried and still living with his parents. His brother Klas, a carpenter, had emigrated sometime around 1911 and was living at 200 Ridgewood Avenue, Joliet, Illinois as Claus Benson. Ernst decided to join his brother and, travelling with his cousin Gustaf Hjalmar Edvardsson, he boarded the Titanic at Southampton as a third class passenger (ticket number 349911 which cost £7, 15s, 6d).

Ernst Aronsson died in the sinking and his body, if recovered, was never identified.

The Mansion House Fund paid 875.52 Kr (£48) to his parents with a further 2217.60 Kr (£75) damage claims paid on 9 October 1914. His parents were poor which entitled them to higher payments from the White Star Line. His father wrote to the ministry of foreign affairs on 30 April 1912 "I myself am of small means and have 6 children to support, 5 of them younger than 14 years old. I should therefore be very thankful if your Excellency could do anything about it".

His brother Klas seemingly returned to Sweden but again settled in the USA, arriving on 15 October 1930. He was then unmarried and intended to go to Chicago. What became of him thereafter is unknown.