Mr Harry Markland Molson, 55, was born in Montreal, Canada on 9 August 1856, the son of William Molson and Helen Converse.

Molson was the fourth generation member of a family that had made a fortune in brewing beer, banking and building steamships. His great grandfather, John Molson, came to Canada in 1782. By 1817, just 10 years after Robert Fulton sent the first steamship up the Hudson, John Molson had five steamships plying the St. Lawrence.

Harry Markland Molson was educated in Montreal and, between 1873 and 1877, in Germany and Paris. He was not a member of the influential branch of the family. He inherited his fortune by accident when his uncle, John Henry Robinson Molson, unexpectedly died and left his money to his nephew. Harry Markland automatically found himself on the board of directors of Molson's bank.

He was a director of the Canadian Transfer Co., Worshipful Master of Quebec's oldest Masonic Lodge St-Paul's lodge #374, Alderman for Montreal Mayor of Dorval, Commodore of Royal St-Lawrence Yacht Club, President of Canadian SPCA and Governor of the Montreal General Hospital.

A bit of a playboy and hedonist, friends called him "Merry Larkwand Molson."

Molson was used to accidents at sea. In 1899 he swam away from the sinking of the Scotsman in the Gulf of St. Lawrence, and in 1904 swam to shore when the Canada collided with a collier in the St. Lawrence River near Sorel. At the time the Montreal Herald reported that he managed to put on his shirt and trousers but no more. "He jumped through a stateroom window and a short time afterwards was picked up by a lifeboat. As soon as he was rescued from his own predicament he took a very active and helpful part rescuing those in the water."

The Molson family biographer, Shirley Woods, says of him: "While he enjoyed a variety of sports, his passion was sailing...he owned the Alcyone, a luxurious 75-foot yacht of 40 tonnes. The Alcyone was ideal for cruising and was equipped with 26 electric lights. Among the guests on board for her maiden voyage were Harry's cousin, Alexander Morris, and his comely wife, Florence Nightingale Morris. This was not surprising, for Harry and Alexander had much in common, including an intimate relationship with Florence. Indeed, Harry and the Morrises might best be described as a menage a trois; Alexander did not mind sharing his wife with his cousin. Harry, Alexander and Florence's discreet liaison was common knowledge in Montreal and continued until Harry died."

Just before he sailed to England he changed his will leaving his property in Dorval to Florence, as well as $30,000, (about $800,000 in today's money) "to be unseizable and entirely her own property."

Molson went to England for business in February 1912 and had booked passage to return to Canada at the end of March on the Tunisian. Molson was a director of one of Major Arthur Peuchen's companies, and it was Peuchen who persuaded him to extend his stay in England and sail home with him on Titanic. Molson could well afford sumptuous accommodation, he paid £30 pounds 10 shillings for his cabin, C-30 (ticket number 113787).

He was last seen on Titanic removing his shoes and planning to swim to a ship whose lights he saw a point and a half off the port bow. His body was never recovered.

His memorial in Montreal's Mount Royal Cemetery is verse 19 from the 77th psalm: "Thy Way is in the Sea, and Thy path in the great waters, and Thy footsteps are not known." 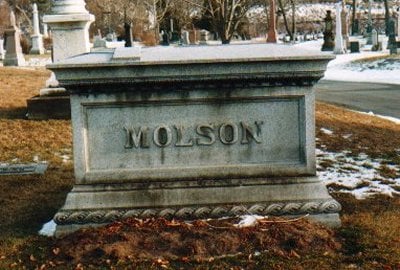 (8 May 1909) LAURENTIC IS HERE
The Globe (16 April 1912) Many Canadians on Fated Steamer
The Toronto World (17 April 1912) THREE MONTREAL MEN---VICTIMS OF TITANIC TRAGEDY
Calgary Herald (20 April 1912) Another Added to List of Lost Is Albert Mallet, a Traveller