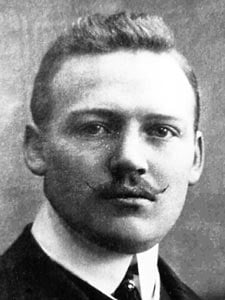 Hendrik ("Hennie") Bolhuis, 27 was born in Ten Boer, Groningen, Netherlands on 26 December 1884 the son of Hendrik Bolhuis and Anje Kooima.

He boarded the Titanic at Southampton as a member of the à la carte restaurant. He signed-on on 6 April as larder cook and came aboard on 10 April. He received his wages directly from Luigi Gatti, the manager of the restaurant.

Hendrik Bolhuis died in the sinking. His body, if recovered, was never identified.

Mr Bolhuis was from Groningen, Netherlands, where his parents died in 1910 and his only relative, his brother Klaas Bolhuis, lived. After the death of his parents, Hendrik left their home to see the world. Good looking Hennie, as he was called, worked at some hotels over Europe: Paris, Monte Carlo and Oostende. He was described as an impulsive man, who loved his freedom. Nevertheless he always returned to his home. This occasion was always celebrated with a party.

In October 1911 he joined the Olympic as a cook. He witnessed the collision with the H.M.S. Hawke, and wrote back home:"nearly we went down with every soul on board, because the ship had a heavy collision." He announced his intention to come home in March or April 1912, but he never appeared. His last address was 37 Orchard Place, Southampton.

His brother Klaas Bolhuis worried greatly about him as May and June passed by. In early June he received a letter from an Austrian friend of Hendrik, it told him that his brother had gone down with the Titanic. A few days later another letter from France said the same. At the end of July the consul of Holland in London wrote that the board of trade had informed him that "Henri Bolhuis", a larder cook, died in the sinking of the Titanic.