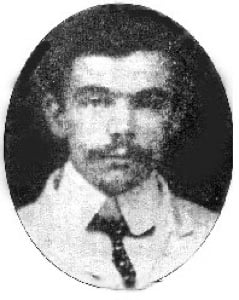 Henry Samuel Morley was born in Marylebone, Middlesex, England on 3 May 1873.

He was the son of William Morley (b. 1849) and Emily Mace (b. 1850). His father, a tailor, was originally from Hertfordshire whilst his mother was from Norfolk and they had married in London in 1871.

He and his family appear on the 1881 census living at 4 Elizabeth Cottages, Robert Street South in Plumstead, London. His father died on 30 January 1889 and by the time of the 1891 the remainder of the family were listed as living at 21 Joseph Street, Woolwich, Kent. His mother was described as a tailoress and Henry as a grocer's clerk.

Henry was married in Worcester, Worcestershire in 1899 to Louisa Price (b. 1868 in Worcester). The couple appear on the 1901 census living at Tiernon (?) Park, Bedwardine, Worcester and Henry is described as a grocer's manager. The couple would have only one child, a daughter named Doris Louisa (b. 1903). They later operated a sweet shop in Worcester for the firm L. Morley Confectioners of which Henry was a senior partner. The family appear on the 1911 census living at 22 Foregate Street in Worcester. Also living there was his mother Emily, aunt Alice Mace (who was an assistant in the business) and a nephew, Vincent Morley (b. 1902). One of their employees was a young woman named Kate Florence Phillips.

Henry and Kate, who was only 19, began a clandestine affair that led to Henry abandoning his family and boarding the Titanic with Kate in Southampton. They travelled as second class passengers under joint ticket number 250655 which cost £26 and they were travelling under the pseudonym Marshall. Destined for Los Angeles, California, Henry had told family and friends he was visiting that climate to recuperate from a recent illness.

Henry Morley died in the sinking and his body, if recovered, was never identified. Kate Phillips returned to Worcester and on 11 January 1913 bore a child named Ellen Mary whom she claimed was the daughter of Henry. The validity of this claim has never been proven, though Ellen, in later life, fought vigorously to have Henry recognised as her father and installed on her birth certificate. She died in 2005 with the issue still unresolved.

His widow Louisa never remarried and later lived in Malvern, Worcestershire. She died on 1 September 1930. His daughter Doris was later married to the Reverend Arthur Sidwell Johnson (1899-1992) and she died in Warwickshire in 2000.