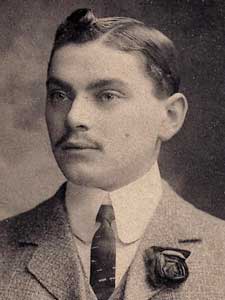 Mr Heinrich (Henry) Wittmann1 was born in Obernalb, Austria2 on 26 June 1873, the son of Henrich and Maria Wittmann. Other details about his early life remain unclear.

When Wittmann arrived in England is not certain although he may have arrived as early as 1893. He first appears on the 1901 census as a member of waiting staff living at Leasowe Castle, Wallasey, Cheshire, then a hotel, and he was described as a naturalised citizen.

Henry and his wife initially settled in the Liscard area of where their first three children were born. By this time Henry was working at sea and was shown on numerous voyages aboard Cedric across 1903 and 1904; his ship prior to that had been the Celtic and his address on all records was given as 9 Burns (Barnes?) Road, Liscard. He was shown working aboard the Cedric with several other Titanic crew, including William McMurray.

He and his family moved to Southampton sometime around 1909; they are recorded on the 1911 census whilst living at 12 Richville Road, Shirley, Southampton and Henry was described as a ship's steward.

When he signed-on to the Titanic in Southampton on 4 April 1912, he gave his address as 12 Richville Road, Southampton3. He had transferred from the Olympic and as a bedroom steward he received monthly wages of £3, 15s.

Henry Wittmann died in the sinking; his body (#315) was recovered by the Montmagny and was buried at Fairview Lawn Cemetery, Halifax, Nova Scotia on 10 May 1912.

His widow Amelia never remarried and remained in Southampton, later living at 90 Cedar Road where she died aged 74 on 12 February 1955. She had also weathered the loss of her son Arthur Robert in 1915 aged 8.

Henry's daughter Amy Hilda was married in 1939 to Percy Selwyn but it is unclear if she raised a family. When her mother died in 1955 she was described as a single woman. Amy died in Bournemouth, Hampshire in 1985.

Son Ernald Thomas was married in Southampton in 1935 to Ada James and is known to have had at least one child. He later worked as a business representative and settled in Gloucestershire where he died in 1983.