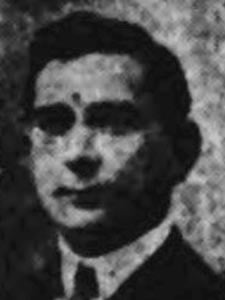 Mr Herbert Henry Thompson, "Bert", was born in Bootle, Lancashire, England in the second half of 1887.

Herbert and his family first appear on the 1891 census whilst living at 33 Oregon Street, Bootle and they have moved to 12 Kemen (?) Terrace by the time of the 1901 census. His father passed away the following year in 1902 and his widowed mother appears on the 1911 census living at 59 Peel Road, Bootle. Herbert himself is listed as a boarder at 9 Greville Road, Southampton, the home of the Berry family, and he was described as a ship's storekeeper; at the time he was unmarried.

Herbert was married in St Leonard's Church, Bootle on 4 February 1912 to Hilda Chester (b. 1882 in Walton, Liverpool, daughter of Charles and Annie Chester), a Liverpudlian who was also living and working in Southampton, as per the 1911 census, as a dressmaker. The couple would have no children.

Thompson initially joined the Titanic in Belfast for the delivery trip to Southampton. When he signed-on for the maiden voyage on 4 April 1912 he gave his address as "Eastwood," Lumsden Avenue, Southampton. His previous ship had been the Oceanic and he had also served aboard the Olympic during his career. As a storekeeper he received monthly wages of £4, 5s.

Herbert Thompson died in the sinking and his body, if recovered, was never identified. The following death notice appeared in the Hampshire Independent (unknown date):

What became of Herbert's widow Hilda isn't clear but she may have returned to her native Liverpool.

On 15 April 1914 a memorial was placed in the Liverpool Echo:

THOMPSON--In loving memory of our darling brother Bert, who was lost on the R.M.S. Titanic, April 15, 1912. (Fondly remembered by Charlie and Ethel.)

The following year more memorials appeared in the same paper:

THOMPSON--In cherished memory of my dear son, Bert Thompson, who was lost in the Titanic, April 15, 1912. There is a link death cannot sever, Sweet remembrances last for ever--Mother

THOMPSON--In loving memory of our dear brother, Bert Thompson, who was lost in the Titanic, April 15, 1912. (Always lovingly remembered.)--Alice and Henry

THOMPSON--In sad but loving memory of our darling brother Bert, who was lost in the R.M.S. Titanic, April 15, 1912. (Never forgotten by Charlie and Ethel.)

THOMPSON--In cherished memory of my youngest beloved son Bert, who was lost on the Titanic, April 15, 1912. (We shall meet beyond the river, where is no more sea.) Mother.

THOMPSON--In loving memory of our dear brother Bert, who was lost on the Titanic. (As long as life and memory last we will remember him.) Henry and Alice.