Junior boilermaker on the Titanic 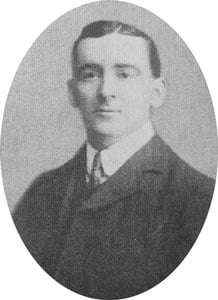 Mr Hugh Joseph Fitzpatrick was born in Barrow-in-Furness, Lancashire, England in 1883 and his birth was registered in the third quarter of that year.

He was the son of Irish parents Hugh Fitzpatrick (b. 1847), an engine fitter (possibly with Harland & Wolff), and his wife Teresa Kerr (b. 1844), a dressmaker, both natives of Co Down, Ireland and who were married in Castlewellan, Co Down on 10 September 1869. His family moved to Lancashire around 1875, having had a brief spell living in Scotland, where his brother Daniel was born, and another spell in their native Co Down, Ireland where his sister Anne was born.

On the 1881 census of England Hugh's family were resident at 16 Robert Street, Barrow in Furness. The family returned to Ireland around 1887 and settled in Belfast.

Hugh appears on the 1901 census of Ireland living with his family at 28 Brougham Street in the Dock Ward of Belfast City, aged 16, and described as an apprentice boilermaker. He had served his apprenticeship with Harland & Wolff, Belfast and he joined the White Star Line around 1905. He had served previously on the Baltic and the Romanic before joining Titanic.

He was married in St Joseph's Church, Belfast on 13 April 1910 to Margaret Daly (b. 8 April 1889 in Belfast), daughter of James Patrick Daly, a plumber, and his wife Rose Marley. Their respective addresses at the time were listed as 28 Brougham Street and 71 Nelson Street and Hugh was described as a mechanic.

The couple had one son, Daniel Michael1, who arrived on 27 October 1910, their address then being 171 Nelson Street. The family appear on the 1911 census of Ireland living at 70 Nelson Street in Clifton, Belfast and Hugh was described as a boilermaker.

Having been among the crew who brought the Titanic over to Southampton from Belfast, when Hugh signed on to the Titanic in Southampton on 6 April 1912 for the maiden voyage he gave his address as 169 Nelson Street, Belfast. As the junior boilermaker he could expect monthly wages of £11.

Hugh Fitzpatrick was lost in the sinking and his body, if recovered, was never identified. He is remembered on several memorials.

His wife had been pregnant at the time of the disaster and on 10 October 1912 his daughter Rose Ann Theresa was born.

Hugh's widow remarried to George Doyle, a seaman on 17 March 1921 and had seven more children. She resettled in Warrenpoint, Co Down, later living at 23 Newry Street in that town where she died a widow aged 54 on 30 June 1943. Her two children by Hugh Fitzpatrick both emigrated to Victoria, Australia, Daniel dying in 2001 and Rose in 1999.2