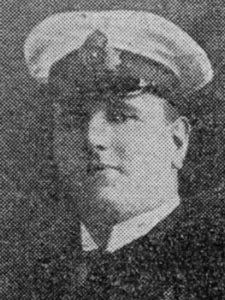 He first appears on the 1881 census when the family were living at 6 Eversley Street, Toxteth Park. His father passed away in 1888 aged 44 and two years later, at age 16, Hugh joined a Roman Catholic Religious Order, "Canons Regular of the Lateran," as a student for the priesthood. At that time the Order's seminary was based at St Mary's Priory, Bodmin, Cornwall where St Mary's Roman Catholic Church is still situated today; he appears there at the time of the 1891 census. After only two years' study McElroy decided that the priesthood was not for him and he left the Priory in 1892 and returned to his home in Liverpool where he followed his father by joining the Merchant Navy. He and his family appear on the 1901 census living at 6 Wilton Street, Liscard, Cheshire, where they had moved to the previous year, and Hugh was described as a ship's purser.

During the Boer War McElroy served aboard the troopship Britannic; he is mentioned in the Boer War Transport Medal Roll book and was awarded the Transport Medal and the South Africa Clasp. He was shown in September 1899 earning £10 a month as purser aboard Cymric and his address was given as 17 Central Park Avenue, Liscard. He served briefly aboard Germanic before returning to Cymric before the close of the year and was shown working aboard her until at least December 1900. Throughout 1901 and 1902 he served aboard Majestic; by 1903 he was purser aboard Cedric and earning £15 per month and stating his address as Hotel St George, Liverpool. By 1906 he was back aboard Majestic and still working aboard her until at least January 1907. He served aboard Majestic and Adriatic under the command of Captain E. J. Smith before he, alongside chief steward Andrew Latimer and surgeon Dr Norman O'Loughlin were transferred to Olympic.

He was married in Ballymitty, Co Wexford, Ireland over the summer on 9 July 1910 to Barbara Mary Ennis (b. 18 May 1876) in a ceremony performed by his brother, Father Richard McElroy. He was described as a purser for the White Star Company.

Barbara Ennis, born in Liverpool, was the daughter of John Ennis, JP and Elizabeth Taylor; her father, the manager of steamship company the Allan Line, was an Irish Catholic from Co Wexford. Her family had relocated there sometime around the turn of the century and made their home at their estate, Springwood, at Tullycanna. John Ennis was a sick man and was cared for by a resident nurse at his home which consisted of ten rooms and was run by domestic servants, his farming property also employed farmhands and a stableman.

Hugh and his wife appear on the 1911 census living at the home of his father-in-law John Ennis in Tullycanna; they were and would remain childless. By early 1912 they were living at Polygon House in Southampton.

McElroy signed on to the Titanic on 9 April 1912 and as chief purser he could expect to earn a monthly wage of £20. Before joining Titanic Hugh sent two postcards from the Royal Southampton Yacht Club, both were to his priest friends. One sent to Phillip Corr dated 6 April 1912 read as follows:

“Many thanks for your letter and good wishes which I reciprocate, the “Titanic” is in many ways an improved Olympic and will I trust be a success, I am sorry I could not get down to Swanage this time but I was tied to Southampton and the train service too erratic to take chances, all kind of messages to you both”.

On the card, which still exists, a different hand had noted “coal strike time” against the reference to the train service and so the Titanic sailed. The other card was to his friend Cuthbert McAdam still in Bodmin Priory; this was also dated 6 April 1912 with a message in a similar vein.

On the 11 April 1912, before Titanic sailed Hugh and his wife Barbara attended a special Flying Matinee in Southampton at the Hippodrome Theatre to see the world-famous Danish dancer Mademoiselle Adeline Genee and after watching her performance they sent flowers backstage, which were in the Danish national colours.

Hugh had taken to babysitting a canary and it is alleged the animal sailed on the Titanic and survived; it was owned by a Mr Meanwell who lived in France and who wanted to get his precious canary to Cherbourg from England and asked McElroy to do this.

Apart from Bruce Ismay and Captain Smith, the only other officer who regularly dined with the passengers was McElroy; renowned for his amiability and good sense of humour McElroy appears to have been almost as popular with passengers as the captain and many timed their journeys so they could travel with him.

On the night of the 14-15 April 1912, Hugh had spent an evening (as was his normal duty) in the First Class dining saloon. Many survivors reported seeing him during the evacuation.

"... as I passed up the staircase, I got to A deck and I saw Mr McElroy the Chief Purser, and Mr Dodd, the Second Steward. They were in deep conversation. I thought to receive some orders from them, but there were no orders given, and I passed on to the next deck, the boat deck."

Purser McElroy was seen at boat 9 where he was assisting in the loading. First Officer Murdoch was supervising and Ismay and McElroy were engaged in conversation. Bathroom steward Isaac Widgery stated "I was asked by purser McElroy if I understood anything about lifeboats I said “I understood a little” and just then some biscuits came up from the storekeeper. I helped him put one of the boxes into the bottom of the boat. I was then told by Purser McElroy to get into the boat. Saloon Steward William Ward said "Purser McElroy sent me along. They had taken the canvas off of No. 9 and lowered it, we lowered her down to level with the boat deck, and a sailor came along with a bag and threw it in the boat. This man said he had been sent down to take charge of the boat by the captain. The boatswain’s mate, Haines, was there, and he ordered this man out of the boat, and the man got out again.

Jack Thayer witnessed McElroy at collapsible C late in the proceedings; two men jumped into the boat and McElroy is said to of fired his gun twice into the air as First Officer Murdoch ordered them out.

With the water at C Deck and rapidly rising, Purser McElroy stood with Drs O’Loughlin and Simpson and Assistant Purser Reginald Barker. For a brief time they were joined by Second Officer Lightoller who was sweating from his work at the boats. Simpson joked "Hello Lights, are you warm?" After spending most of the night on the starboard side of the ship, loading passengers into the lifeboats, the small group shook hands and said goodbye.
Purser McElroy was last seen standing on the Boat Deck near the gymnasium, beside mail clerk Mr William Logan Gwinn.

A few days later a body was pulled from the sea by the crew of the MacKay-Bennett and among the effects were keys tagged “Linen locker No 1 - C Deck” and the address “Miss McElroy, Layton, Spottisbury, Dorset” (Mary McElroy who was Hugh’s sister).

Barbara McElroy was remarried on 3 June 1914 in Kingstown (modern-day Dún Laoghaire), Co Dublin, becoming Mrs John Clancy. She remained in Ireland for the rest of her life and died at Springmount, Ballymitty, Co Wexford on 18 December 1953.

McElroy has a memorial in Liverpool.

According to Dr. Beaumont of the Olympic who said, "Purser McElroy had been woken on several occasions on the Olympic due to suffocating nightmares, which gave way to him having some premonitions about sailing on the Titanic, he would have nightmares of being in a dark tunnel with no means of escape".

Hearing of the disaster, his brother Richard, travelled up from to Southampton, he was accompanied by a fellow-priest Father Aloysius Smith who was also at St Mary’s Priory, Bodmin in Cornwall, whose brother Reginald George Smith was coincidentally a saloon steward on the “Titanic” and he had also perished. Father Phillip Corr finished his studies and eventually served as a Roman Catholic Parish Priest in Swanage, Dorset for 25 years. At the time of the “Titanic” disaster, Corr was returning home from Canada after visiting relatives there, the ship on which he was returning was the “SS Carpathia”. The Ennis family no longer live at “Springwood” anymore the estate was sold to Mr & Mrs John Nolan, Aidan Ennis who is now a Jesuit Priest in Dublin and is the only remaining member of the Ennis family, as Louise Ennis died on November 1987 and therefore “Springwood” was sold after her death, “Polygon House” which in 1938 was renamed “The Polygon Hotel” and was situated at the corner of Devonshire Road and The Polygon, (a new block of flats was put up). They placed two stones in the wall surrounding the Flats, one from the original Polygon House, when was the first laid from the Polygon on 9th August 1768, the second stone is from the Polygon Hotel and this was first laid on 22nd September 1937.