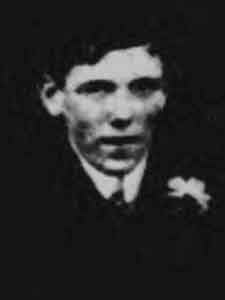 James appears on the 1901 census with his family living at 100 Paget Street, Canton, Cardiff. By the time of the 1911 census the family were living at Inglenook, Sully Road, Penarth, Cardiff and James was described as a butcher. He was a regular attendee of Sunday school in his local Trinity Methodist Church.

James boarded the Titanic at Southampton on 10 April 1912 as a third class passenger (ticket number  362316 which cost £7, 5s). His destination and reason for travelling is not known. He died in the sinking and his body, if recovered, was never identified.

A brass plaque was erected to James' memory at Trinity Methodist Church. The inscription reads:

WHO WAS DROWNED IN THE

ERECTED BY THE MEMBERS OF HIS

Both his parents continued to live in Penarth. His father died on 7 May 1916 whilst his mother passed away on 7 June 1950.