Mr James Kelly was born in Leixlip, Co Kildare, Ireland around 1864. He was the son of William Kelly, a labourer and Catherine Cafferty.

He was married on 31 January 1887 to Catherine Goffe1 (b. 11 November 1865), a domestic servant and daughter of Thomas Goffe. The couple had a total of ten children, with seven surviving infancy.

Their firstborn John died from convulsions aged just ten months on 1 April 1888 whilst their daughter Elizabeth died from the same condition on 26 December 1902, aged nine months. The youngest Patrick was born disabled and died 12 November 1907, just shy of his first birthday.

The family appears on the 1901 census living in house 11 in Allenswood, Leixlip and James was described as an illiterate road labourer. They appear on the 1911 census living at house 9 in Leixlip town.

James' eldest daughter Margaret had left Ireland in early 1911 and settled in New Haven, Connecticut where she worked in Strouse-Adler's corset shop. Her uncle John, her father's brother, also worked in New Haven as a machinist. Margaret's earnings paid for a ticket for her father to join her in the USA with plans to bring the entire family over in due course.

James Kelly died in the sinking; his body was later recovered by the MacKay Bennett (#70) and buried at sea on 24 April 1912.

The beads (presumably a rosary) were left with the body when it was committed to the sea, the others were sent to his daughter Margaret. 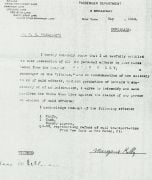 His family back in Ireland struggled financially in the wake of his death and were assisted by various relief funds. They joined Margaret Kelly in New Haven later in 1912, on a voyage paid for by the White Star Line.

His widow Catherine died in New Haven on 14 October 1955 but not before further heartbreak: her son Thomas served with the 1st Battalion of the Connaught Rangers and was killed in Mesopotamia (modern-day Iraq) on 23 January 1916. He is commemorated on the Basra War Memorial.

James' last surviving child was his daughter Mary who died in West Haven, Connecticut on 13 April 1990. His other children also remained in Connecticut; Margaret died 28 August 1976, Catherine on 28 February 1964, William on 9 March 1976 and Bridget and James both in 1987, on 13 August and 5 July, respectively.