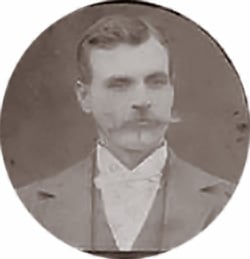 Mr John Downing Smillie 1 was born at 5 Drake Street in Bootle, Lancashire, England on 30 November 1883 although would claim Glaswegian roots in later records.

The Smillie family moved from Glasgow to Liverpool sometime after 1881; the 1891 census shows them as residents of 32 Orlando Street, Bootle but John's father was absent, then working as a ship's cook. Peter Smillie had been ship's cook aboard Pavonia for a number of years.

The 1901 census shows the family living at 421 Stanley Road, Kirkdale; his father was then listed as a cook in his own coffee house whilst a 17-year-old John was described as an engineer fitter. His mother later passed away in 1905 aged 50.

Smillie later went to sea, although when is unknown; he was shown working as a boots steward aboard several crossings on the Empress of Britain of the Canadian Pacific Line, appearing aboard that ship on several crossings out of Liverpool in 1907 when he gave his local address as 36 Molyneux Road, Liverpool and by then stating his birthplace as Glasgow.

He was shown on the 1911 census residing as a boarder at 16 Malmesbury Road, Freemantle, Southampton and he was described as an unmarried ship's steward; also residing at that address was another future Titanic steward, George Evans. His father, a widower since 1905, was shown on the same census living with his daughter Helen at 17 Ashlar Road, Waterloo, Liverpool and was described as a retired butcher.

Smillie was on board the Titanic for her delivery trip from Belfast to Southampton and when he signed-on again in Southampton, on 4 April 1912, he gave his address as 16 Malmesbury Road, Southampton. He had previously served aboard Olympic and as a first class saloon steward he received monthly wages of £3, 15s.

Smillie died in the sinking and his body was later recovered by the Mackay-Bennett (#91) and buried at sea on 23 April 1912:

His grieving family, on the first anniversary of his death, placed the following memorial to him in the Liverpool Echo:

His widowed father remained in Liverpool, later living at 41 Bedford Road, Bootle where he died on 22 October 1922. His last remaining sibling, his younger sister Margaret, died in Matlock, Derbyshire on 30 September 1961.

In 2012 a number of Smillie's personal items were put up for auction, including letters and a group family portrait, with an image of Jack inset.