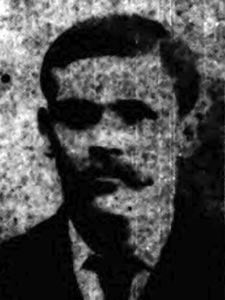 Mr Lewis Owen was born in Llandudno, Wales around the latter half of 1862.

He was the son of Richard Owen (b. circa 1832), a plasterer, and Ann (née Evans?) (b. circa 1834), natives of Caernarvonshire and Denbighshire, respectively.

Lewis first appears on the 1871 census, described as an 8-year-old residing with his family at an address in Llangystennin, Caernarvonshire. The family later shifted into England and by the time of the 1881 census they were residents of 21 Fairfield Road in Tranmere, Cheshire; young Lewis, like his father, was then described as a plasterer. The stay in England was perhaps short-lived and by the time of the 1891 census Lewis' parents and several siblings were back living in Wales, their address listed as 7 Clifton Road, Llandudno; he himself was not listed there and his whereabouts are unclear.
Lewis went to sea at a young age and first appears in crew records in 1888 when he was a "general servant" aboard Liguria and then earning £1, 10s per month.

He was married in Southampton in 1903 to Maud Louise Young (b. 16 July 1881 in Southampton), the daughter of a seaman. The couple would have no children and by the time of the 1911 census they were resident at 29 Earls Road, Portswood, Southampton although Lewis was absent, presumably at sea.

When he signed-on to the Titanic on 4 April 1912 Owen gave his address as 29 Earls Road, Southampton. His previous ship had been the Oceanic and as a second class steward he received monthly wages of £3, 15s. Also serving aboard, as a fireman, was his brother-in-law Francis Young.

Lewis Owen died in the sinking and his body, if recovered, was never identified. His brother-in-law Francis Young was also among the lost.